The Most Deceptive Word In The English Language 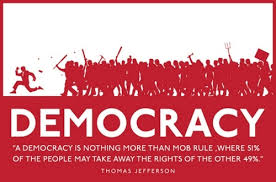 This is a political and subversive word created and promoted by the establishment as a major key to formulate and channel the public mind. It has more than saturated the public conscience. Very “intellectual” people spout this word assuming that it means human freedom and liberty.

The truth and purpose of this word is for a cover and disguise for fascism and socialism. This word is the workhorse of the American propaganda ministry.Every person is taught this word, from politicians to school children. The government indoctrination centers (also known as schools) and the corporate media use it religiously. Politicians love its sound. It is one of President Barack Obama’s favorite words.

It was an important word to Hitler and Joseph Goebbels.

What is this word? It’s “Democracy.”