The more I learn about the debacle they call the Affordable Health Care Act or Obama Care........ 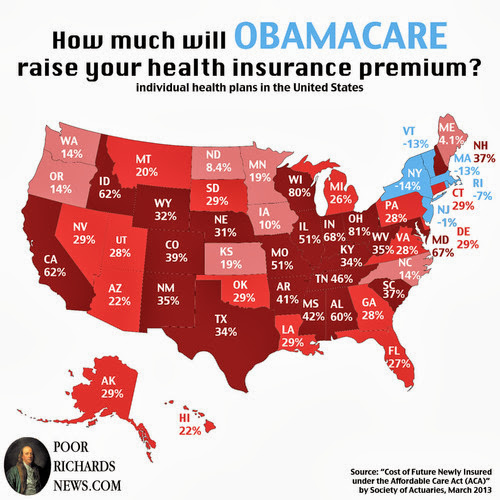 ........ as it has become affectionately known the more confused I am how anyone in their right mind would have allowed this to become law. Yes I know they had to pass it to see what is in it but as is becoming all too common the reality doesn't match the hype that was promised.

As I posted earlier my company has begun the process of phasing out providing health care to our employees. We took our current costs for health care and divided that cost up per employee and increased their wages by that amount. The few who did not participate in our current coverage obviously saw a windfall. They were on a spouses plan and got the increase in the same amount of increase as those who did participate. There will those who are still eligible for subsidies as of now who will also be bale to put money in their pocket after purchasing insurance but there are also those who will find their costs increase. I for one will beginning October 1st be paying 50% more to cover my family with a plan that basically is no better than the one I had through the company.

Our insurance broker came and held a general meeting with all our employees explaining the process and the current state of health care. They now ill come back on three different days to meet individually with employees to discuss their needs and help get them signed up for the plan that best fits their needs. The first of these meetings was last Friday and there is a mixed review from our employees following along the lines of who will pocket money and who will be paying more.

Lastly if you do not qualify for a subsidy you are basically screwed. You can expect a 40-60% increase to maintain your current level of health care. Then for everyone with a subsidy or not come 2015 there is another increase expected. In our case we always purchased insurance in line with our fiscal year which starts October 1st through September 30th but now our employees are purchasing insurance at rates quoted for only 3 months. Beginning January 1st 2015 they will not be guaranteed the same arte for 2015. When I asked our broker if they had any idea what those increases might be they said they could only guess. But based off what they are hearing the increases will be between 20 & 40%. The lower increases will go towards the lesser cost catastrophic type plans and the better the coverage the higher increase unless the insurance companies decide to blend the cost increases and just raise everyone up 25 to 30%.

No matter how you look at it this situation just gets uglier and uglier.