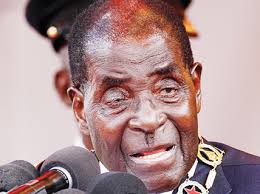 'Cause we just so much better running this country than whites before........

PRESIDENT Robert Mugabe said Friday that whites who are still in the country should go back to England as he vowed that those removed from land redistributed to black Zimbabweans would never be allowed to return.

Mugabe was speaking during the installation of a chief at Murombedzi Growth Point in his rural Zvimba home area.

"The West prefers a weak leader who, they hope, would allow the whites to come back," he said, speaking in Shona.

"They think if they intimidate us we will be cowed and allow the whites to come back; that will never happen.

"Don't they (whites) know where their ancestors came from? The British who are here should all go back to England.

"What is the problem? We now have aeroplanes which can take them back quicker than the ships used by their ancestors."