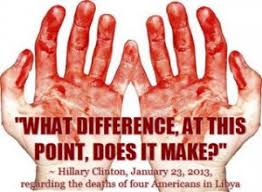 Documents obtained Monday through a federal court order show State Department officials disseminated the false story that the 2012 Benghazi attack that killed a U.S. ambassador was nothing more than the violent escalation of a demonstration by Muslims against an insulting video, even though they knew it was a coordinated military-style assault.

Among the documents obtained by the Washington-based government watchdog Judicial Watch was a memo sent the day after the Sept. 11, 2012, attack to the U.S. Embassy in Tunis, Tunisia, by the State Department’s Diplomatic Security Command Center titled “Emergency Message to U.S. Citizens: Demonstrations.”

The Diplomatic Security Command Center, or DSCC, was well aware that the attack was carried out by highly organized and armed Islamic militia, because the DSCC was the unit that monitored the attack in real time via video transmissions from a drone.

The message is identical to the emergency message issued by the U.S. Embassy in Tunis and archived on the embassy’s website.