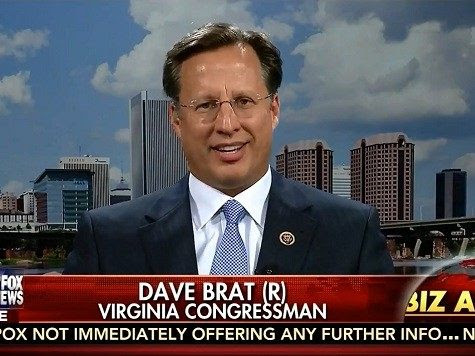 On Tuesday, before the House passed a “clean” Homeland Security funding bill, Rep. Dave Brat (R-VA) warned that there will be “no upper bound” on President Barack Obama’s executive authority if House Republicans caved on a bill that does not defund Obama’s executive amnesty.

Brat, who is fast becoming the conscience of conservatives in the House, accused Republicans of appeasing Obama on domestic issues just like Obama has been appeasing and emboldening some of America’s foreign policy enemies on the global stage.

In an appearance on The John Fredericks Show in Virginia, Brat put the executive amnesty debate into proper constitutional perspective and noted that the truth “came out like a stick of dynamite last night” when White House Press Secretary Josh Earnest revealed that Obama is now “strongly considering” raising some corporate taxes via executive action. Brat said that if Obama is “strongly considering” doing that, “that means there’s no upper bound on the President’s authority” if Congress caves on his executive amnesty.