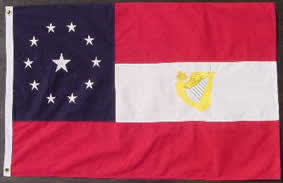 The recent erection of a memorial in Sligo to Carrowkeel man General Michael Corcoran, inspired historian Paul Burns to write this article on the forgotten Irish who fought on the Confederate side:

All discussions of Irish participation in the 1861-65 American Civil War seem to lead, in next breath, to the North’s famous Irish Brigade. Few know that Irish immigrants played an equally important role in the Southern Confederacy. Over 40,000 Irish fought for the Southern cause. They were the largest immigrant group in the army, and they made up about 10% of all Confederate combatants. In contrast, there was less enthusiasm among Irish immigrants to the North, and they were underrepresented in its military.

The Confederate Irish were far more fervent in support of their side’s cause because they could identify in America with the desire for self-determination at home and the right to separate from what was viewed as a repressive government. They had little concern about slavery. The Irish in America were working class, and they competed for jobs with free blacks. Consequently, the Irish in both areas tended to support the pro-slavery Democratic Party. The Southern Irish encountered less animosity and much more religious tolerance than did their Northern brethren. There was no Southern equivalent of the anti-draft riots that occurred in the large Northern cities where the Irish were concentrated.