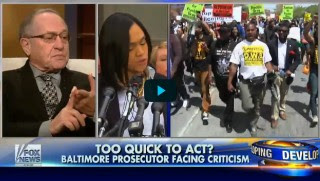 Liberal lawyer, author and criminal law professor Alan Dershowitz has made the media rounds since Friday’s announcement of multiple charges against the six Baltimore police officers involved in the arrest and transport of Freddie Gray, who died while in custody.

And Dershowitz has made no attempt to hide his very strong feelings about the charges that include second degree depraved heart murder, as he told one TV interviewer that there’s ““no plausible, hypothetical, conceivable case for murder.”

On Newsmax TV’s Steve Malzberg Show, the famed attorney and jurist with a very successful track record as a criminal appellate lawyer, added that Baltimore State’s Attorney Marilyn Mosby over-charged in the Freddie Gray case so egregiously that the result will be a “show trial.”


More with video @ Western Journalism
Posted by Brock Townsend at Monday, May 04, 2015