Response To: Some want debate over Confederate symbols in Augusta

Some want debate over Confederate symbols in Augusta

As a  retired veteran, Civil War re-enactor and member of the Augusta Civil War Round Table, I am saddened by the lack of knowledge regarding the inscription on the Confederate Monument in Augusta.  The line, " No nation rose so white and fair, none fell so pure of crime" was taken from a poem written by an English poet and author, Philip Stanhope Worsley, a Fellow of Corpus Christi College in Oxford, England.

Worsely was a friend of Gen. Robert E. Lee's nephew,  Edward Lee Childe of Paris, France, and  sent his book "A Translation of Homer's Iliad" to General Robert E. Lee, whom he greatly admired, in 1866 and wrote the poem in the fly leaf of the book comparing the fall of Troy in the Trojan War to the defeat of the South.

One stanza of the poem reads as follows:

Ah realm of tears--but let her bear
This blazon to the end of time:
No nation rose so white and fair,
None fell so pure of crime.

In none of these verses was the English scholar referring to race but he was using poetic license to compare the rise and defeat of the Confederate States to a flower which blooms and quickly fades.  Worsley obviously knew of Lee's sorrow and wrote the poem in an attempt to soothe and comfort the old soldier.

Obviously the women of the Ladies Memorial Association were aware of Worsley's tribute to Lee  and felt it was an appropriate verse to inscribe upon the memorial to Richmond County soldiers who died in the War Between the States.
The Confederate Monument on Broad is a monument to our fallen veterans--nothing more and nothing less.  Those who would criticize it should consider learning its history before doing so.
Sincerely,
Dr. Arnold M. Huskins
Major, USAF, Retired 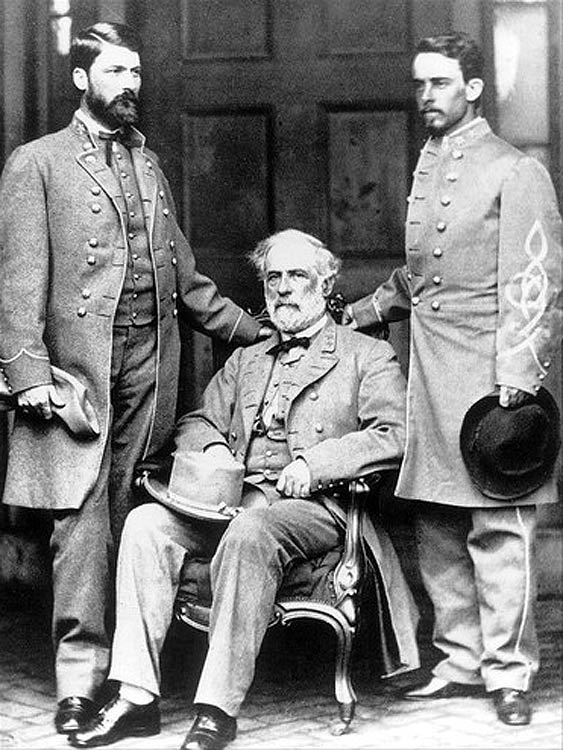 (This poem is on the back of my Great Aunt Dixie's original oil of Lee which has been lost. I have a copy which shows Great Aunt Dixie's signature on the left, and lists her as the artist with a copyright of 1906 on the right. It is dedicated to her brother, John P. Leach, Commander Junius Daniel Camp, United Confederate Veterans, Littleton, North Carolina. BT) Link

The most stainless of living commanders and, except in fortune, the greatest, this volume is presented

“The grand old bard that never dies,
Receive him in our English tongue!
I send thee, but with weeping eyes,
The story that he sung.

“Thy Troy is fallen,–thy dear land
Is marred beneath the spoiler’s heel–
I cannot trust my trembling hand
To write the things I feel.

“Ah, realm of tears!–but let her bear
This blazon to the end of time:
No nation rose so white and fair
None fell so pure of crime.

“The widow’s moan, the orphan’s wail,
Come round thee; but in truth be strong!
Eternal Right, though all else fail,
Can never be made Wrong.

“An Angel’s heart, an angel’s mouth,
Not Homer’s, could alone for me
Hymn well the great Confederate South–
Virginia first, and LEE.
Posted by Brock Townsend at Tuesday, June 30, 2015