Via comment by Anonymous on Episcopalians vote to allow gay marriage in church... 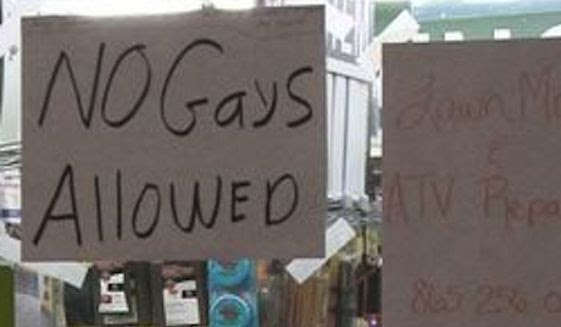 A small hardware store in East Tennessee is making national headlines after posting a “No Gays Allowed” sign in the storefront window following the Supreme Court’s decision allowing same-sex marriage.

Jeff Amyx, a baptist minister who owns Amyx Hardware & Roofing Supplies in Grainger County, said he added the controversial sign in order to stand up for his religious beliefs.

“They gladly stand for what they believe in, why can’t I? They believe their way is right. I believe it’s wrong,” Mr. Amyx told a local NBC affiliate. “But yet I’m going to take more persecution than them because I’m standing for what I believe in.”