During the North Vietnamese Army’s (NVA) Easter Offensive in the spring of 1972, a “new face of war” emerged in the Republic of Vietnam (RVN); unlike previous years, the war evolved into a mild-intensity conflict replete with massed forces, sophisticated weaponry, and massive firepower on both sides. At no place was this more apparent than in Military Region (MR) III where United States air power proved to be the decisive factor in lifting the siege of the beleaguered province capital of An Loc. During a three-month period commencing in April, the United States Air Force (USAF) provided the Vietnamese garrison and its handful of U.S. advisors with their major means of fire support, their primary source of re-supply, and interdiction of enemy forces at the tactical level. This triad of support not only broke the NVA’s stranglehold on the once-prosperous rubber plantation town but also destroyed the better part of three divisions that would have been poised to move on Saigon, some 90 kilometers to the south, had An Loc fallen.

The attack on An Loc was only one facet of General Vo Nguyen Giap’s military strategy to gain Hanoi’s long-sought political ends in RVN. Unlike the Tet attacks of 1968, Giap chose not to use Viet Cong (VC) insurgents as his main attack force or depend upon a peripheral strategy that necessitated a popular uprising in the south (2). Instead, he directed conventional attacks in MR I, II, and III involving the commitment of practically all North Vietnam’s regular forces; these divisional-size elements, well-balanced in armor, infantry, and artillery were oriented toward the destruction of RVN’s armed forces, trapping, if possible, the remaining U.S. personnel in the country. This would yield the additional benefit of discrediting the U.S. as an ally since an arrangement would probably be made to extract these troops. Apparently, the basis for the NVA action revolved around the assumption that “Vietnamization” was a failure and that the U.S. public was so adverse to continued involvement in the Vietnam War that President Nixon would be unable to react to bolster Thieu’s government (3). The importance of the upcoming November Presidential elections as an additional constraint on U.S. decisionmakers was not lost on North Vietnamese planners. A similar situation had existed in 1968, and although the NVA and the VC suffered a staggering military defeat, they won an incalculable political victory in the United States that later changed the course of the war.

Now, given the maximum use of North Vietnamese military power and the political climate in the U.S., the probability of success of the Easter Offensive from Hanoi’s vantage point undoubtedly seemed very high. 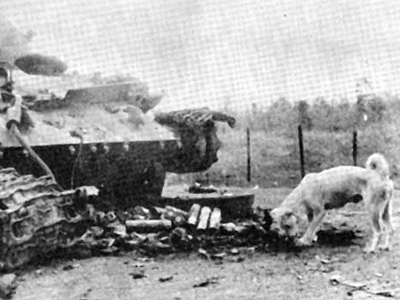 North Vietnamese forces block Routes 1, 4, and 13, all major South Vietnamese ground supply routes to Saigon. For the next two months, Communist forces repeatedly interdicted these and other key supply routes critical to Saigon’s survival in an attempt to strangle the city. This was all part of the Nguyen Hue Offensive, which had been launched in late March.