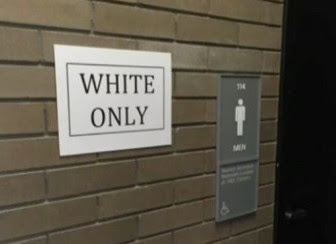 Cries of racism broke out across the campus of the University of Buffalo this week when students found Jim Crow-esque signs in a building on campus.

Someone had posted “White Only” and “Black Only” signs near several bathrooms and water fountains in Clemens Hall.

“It brought up feelings of the past of a past that our generation has never seen which I think is why it was so shocking for us to see,” Micah Oliver, president for the Black Student Union, tells ABC 27.

More than 100 students turned out to a Black Student Union meeting to discuss the signs.

“There was fear expressed, anger, disappointment – all of that,” according to Oliver.

And then, Ashley Powell, a black graduate student, stood up in the meeting to admit she had hung the signs, claiming it was part of an “art project,” The Buffalo News report: