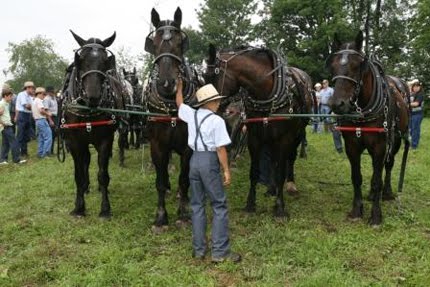 How Farmers Became Slaves to the Corporate Masters

At the end of the nineteenth century the American landscape was undergoing great change as mechanization transformed the independence and self-reliance of the ordinary farmer. The tractor and combine enabled him to plow, seed and harvest more fields than before, but it came at great cost.
Bernhard Thuersam, www.Circa1865.com   The Great American Political Divide

“John Smith was a frugal farmer, and raised enough feed – corn, oats, and silage – to supply his work stock and brood mares. He never bought feed and he rarely bought a horse or mule.

John Smith first bought a car, a Ford, to take the place of his saddle horse and buggy. Next he bought a tractor, and then a trailer for use as a truck. He bought a tractor because the International Harvester Company proved to him that horses have to be fed whether they work or not. The agent showed him striking pictures of horses “eating their heads off” on rainy days when there was nothing to do, and he saw pictures of [tractors] in farm magazines.

The farmer was taught to begrudge the feed for his idle horses and mules. Moreover, the tractor and its gang of plows could turn the 130 acres in half or a third or a fourth of the time that the mules could do it. The Country Gentlemen [magazine] published beautiful pictures of tractors at work and wrote simple articles that John Smith, or his boy, could understand.

John Smith finally drove out the tractor, and the demonstrator taught him how to use it. John Smith was now using as much horsepower as before, perhaps more, but he was getting it on quite different terms.

He was buying horsepower in Detroit and Chicago and mortgaging the future to pay for it. The tractor came covered with a thin coat of paint and several coats of protection. It was protected by a series of patents that made it impossible for more than a few competitors to supply him. It was protected by a tariff that made it impossible for England or Germany or Canada to get into his field.

Moreover, the tractor was never known to have a colt tractor, even a “mule.” On top of this the tractor carried a series of profits extending from the steel mills right on up to the gates of John Smith’s farm, and John Smith had to pay for the paint, protection, and profits.

Now, in contrast to the tractor, the mule colt stood in the meadow lot and gazed at the strange contraption in awe and astonishment. The colt represented horsepower just as the tractor did, but the colt cost practically nothing to begin with. Nobody had a patent on him and he carried no tariff. He represented nobody’s capital except John Smith’s and no wages or interest were tied up in his shiny skin.

He would start paying for himself at the age of three, increase in value for six or seven years, and would continue to give good service for twelve or fifteen years and service only a little less valuable after fifteen. He was so perfectly constructed that he would never have to have a spare part, not even a spark plug. He was a self-starter and self-quitter when quitting time came.

Both the tractor and the mule had to have fuel to go on. The mule’s fuel was corn, hay, cane, straw, or what have you on the farm. John Smith raised all these things and never had to go off the farm to get fuel for this hay-burning horsepower. He raised mule fuel with his own labor, or nature gave it to him from the field and the meadow.

Unfortunately, John Smith could not raise feed for the tractor. It had to have gasoline and oil, as well as batteries and parts. All these had to be purchased in the town from the northern corporations. In short, John Smith now buys his horses in Detroit and Chicago; he buys the feed for them from John D. Rockefeller in New York.

In the meantime something else has happened. The mule that cost so little has grown up, but there is no work for him to do. When John Smith offers him for sale, he finds that nobody is willing to pay a fair price for him, perfect as he is. The neighbors too . . . are going to Chicago for mules that deteriorate rather than improve, and to New York for feed which will never be converted into fertilizer.

Though John Smith is still raising feed, he has little use for it. The brood mares have died, the mules have been sold; there is nothing left to eat the corn, cane and grass except a few cows. When John Smith tries to sell his surplus feed, he finds that there are no buyers . . . The neighbors are not using that kind of feed. They prefer the feed that comes out of pumps.

John Smith no longer raises feed. He is now planting the 130-acre farm in cotton or in wheat, thereby wearing out the soil that supports him.

Something fine has gone out of John Smith, something of the spirit of independence and self-sufficiency that was present when the mules were pulling the plow and the colt that had not yet felt the collar was frolicking in the meadow.

In reality, he has become a retainer, and might well don the uniform of his service. He raises wheat and cotton for a world market, unprotected by tariffs or patents, in order that he may buy mechanical mules, feed, shoes, and everything that he needs in a market that has every protection of a beneficent government.”