Via comment by Anonymous on Liberty University President Does Away With Last R... 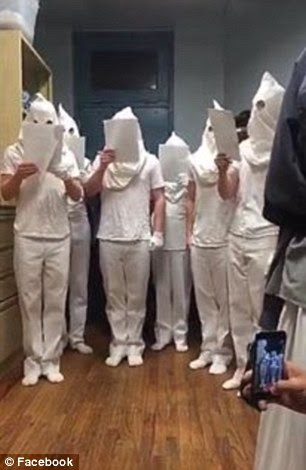 Some just can't a joke.  Ridiculous.
Disturbing photos of South Carolina military cadets at The Citadel have emerged on social media showing them in all white with pillowcases over their heads, appearing to evoke the Ku Klux Klan.

The military college located in Charleston announced in a statement Thursday that it is investigating the photos and has started proceedings to suspend the eight students involved.

'A social media posting, which I find offensive and disturbing, was brought to my attention this morning,' retired Air Force Lt. Gen. John Rosa, the president of the college, said in a statement posted to the school's Facebook page.

'It shows an upper class cadet in front of seven cadets with pillowcases over their heads.