1862: The Confederates Strike Back 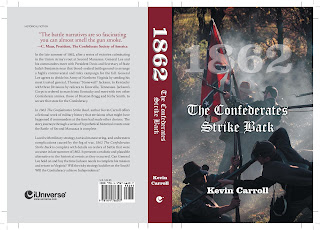 In the late summer of 1862, after a series of victories culminating in the Union Army’s rout at Second Manassas, General Lee and his commanders meet with President Davis and Secretary of State Judah Benjamin near that blood-soaked battleground to arrange a highly controversial and risky campaign for the fall. General Lee agrees to divide his Army of Northern Virginia by sending his most trusted general, Thomas “Stonewall” Jackson, to Kentucky with three Divisions by railcars to Knoxville, Tennessee. Jackson’s Corps is ordered to march into Kentucky and meet with two other Confederate armies, those of Braxton Bragg and Kirby Smith, to secure that state for the Confederacy.

In 1862 The Confederates Strike Back, author Kevin Carroll offers a fictional work of military history that envisions what might have happened if commanders at the time had made other choices. The story journeys through a series of hypothetical historical events once the Battle of Second Manassas is complete.

Laced with military strategy, tactical maneuvering, and unforeseen complications caused by the fog of war, 1862 The Confederates Strike Back is complete with details on orders of battle that were accurate in late summer of 1862. It presents a realistic and plausible alternative to the historical events as they occurred. Can General Lee hold on and buy the time Jackson needs to complete his mission and return to Virginia? Will the risky strategy backfire on the South? Will the Confederacy achieve Independence?