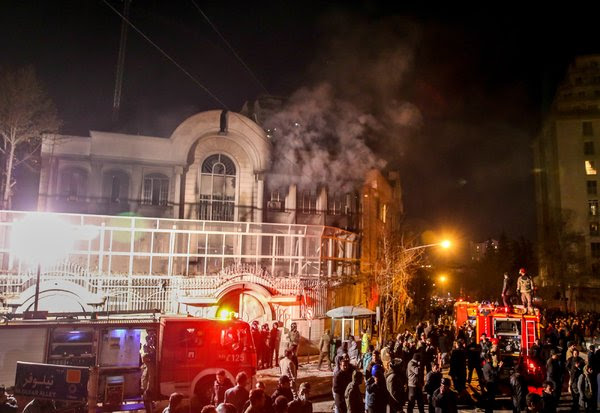 Saudi Arabia cut diplomatic ties with Iran on Sunday and gave Iranian diplomats 48 hours to leave the kingdom, marking a swift escalation in a strategic and sectarian rivalry that underpins conflicts across the Middle East.


The surprise move, announced in a news conference by Adel al-Jubeir, the Saudi foreign minister, followed harsh criticism by Iranian leaders of the Saudis’ execution of an outspoken Shiite cleric, Sheikh Nimr al-Nimr, and the storming of the Saudi Embassy in Tehran by protesters in response.
The cutting of diplomatic ties came at a time when the United States and others had hoped that even limited cooperation between the two powers could help end the crushing civil wars in Syria and Yemen while easing tensions in Iraq, Bahrain, Lebanon and elsewhere.

Instead, analysts feared it would increase sectarian divisions and investment in proxy wars. “This is a very disturbing escalation,” said Michael Stephens, an analyst at the Royal United Services Institute, a research center based in London. “It has enormous consequences for the people of the region, and the tensions between the two sides are going to mean that instability across the region will continue.”