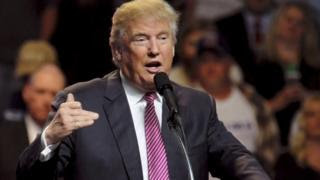 The UK would be "better off without" the European Union, US presidential hopeful Donald Trump has said.

He told Fox News the migration crisis had been a "horrible thing for Europe" and blamed the EU for driving it.

The Republican said he was not making a "recommendation" but his "feeling" was that the UK should vote to sever ties with the EU in its 23 June referendum.