The Handiwork of Heritage Haters 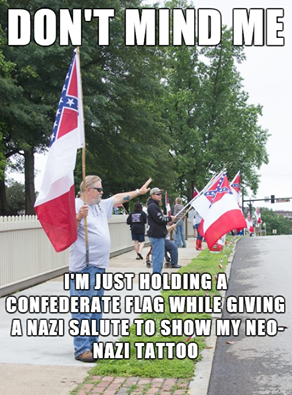 Just in case you needed another example of how the heritage haters will lie, steal, and slander good people in their vile attempts to further their Godless agenda, take a look at this meme, created and posted on the web a few hours by Kristopher Goad AKA "Goad Gatsby", a Richmond area agitator and "social justice warrior".

Mr. Goad illegally removed the trademark watermark from a photo from Judy Smith photography and added the wording shown below in white, claiming the gentleman in the photo is giving a "nazi salute" and has a "Neo-nazi" tattoo on his arm.

Obviously, the gentleman in the photo is waving back at one of the hundreds of Danville citizens who honked, waved, and gave us thumbs up and appreciation for our efforts yesterday. The tattoo on his arm...? That's a memorial to his wife, who died of cancer, as can be plainly seem when the photo is enlarged.


More @ The Virginia Flaggers
Posted by Brock Townsend at Sunday, May 22, 2016