Liberty or Laws? – “nor shall be compelled in any criminal case to be a witness against himself” 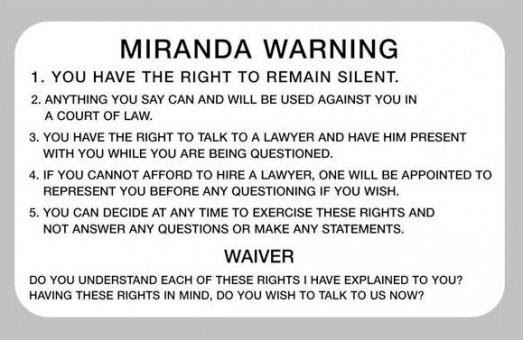 The principle element in this discussion is the Fifth Amendment to the Constitution:


No person shall be held to answer for a capital, or otherwise infamous crime, unless on a presentment or indictment of a Grand Jury, except in cases arising in the land or naval forces, or in the Militia, when in actual service in time of War or public danger; nor shall any person be subject for the same offence to be twice put in jeopardy of life or limb; nor shall be compelled in any criminal case to be a witness against himself, nor be deprived of life, liberty, or property, without due process of law; nor shall private property be taken for public use without just compensation.

The provision that is of concern is, “No person… shall be compelled in any criminal case to be a witness against himself.”  And, we must begin by understanding that, as the Preamble to the Bill of Rights says,


The Conventions of a number of the States, having at the time of their adopting the Constitution, expressed a desire, in order to prevent misconstruction or abuse of its powers, that further declaratory and restrictive clauses should be added: And as extending the ground of public confidence in the Government, will best ensure the beneficent ends of its institution.

Clearly, the Fifth Amendment, then, is a prohibition against the government, “to prevent misconstruction or abuse of [the federal government’s] powers”

To understand the role of the Supreme Court, at least for nearly the past century, we need to review what Justice Brandeis explained in Ashwander v. Tennessee Valley Authority (1936), in which he explained the “rules” that the Court had adopted to avoid “passing upon a large part of all constitutional questions pressed upon it for decision.”  (See About Ashwander v. TVA)

The pertinent rules from that decision are: