No More After Nice, let’s stop the nonsense. 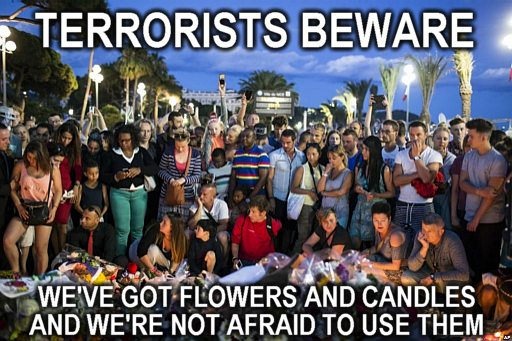 No more flags of foreign countries posted on Facebook in a spirit of solidarity. No more empathic Twitter hashtags. No more empty statements by heads of government declaring that “the terrorists have failed in their effort to turn us against one another.” No more equally empty statements by other heads of government expressing their own country’s support for “our ally in its time of grief.” No more calls for love in the face of hate, or candlelight processions as a response to murder. No more clicking of tongues and shaking of heads over the horrible loss of life—as if people had died in a one-off natural disaster, a hurricane or tornado or tsunami—followed, after a few days, by a return to normal. Until the next time, of course.

No more attempts to psychologically analyze every new jihadist—to probe his troubled family or professional life in an attempt to figure out what “turned him to violence and extremism.”