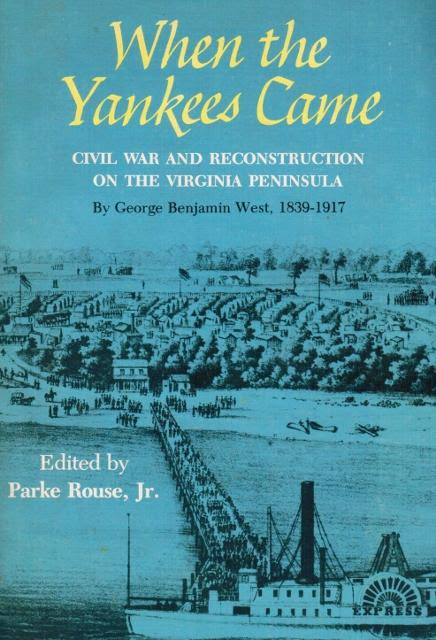 A twenty-two year old Virginian in 1861, George Benjamin West wrote his memoirs thirty years after the war. He noted during his State’s early occupation by the enemy the prevalence of German rather than American soldiers in blue – and the same in 1865 as he rode through occupied Richmond. His observations reveal two distinct cultures in the United States of 1860.
Bernhard Thuersam, www.Circa1865.com   The Great American Political Divide

“Our servants stayed with us several weeks [after the capitulation]. I intended to get a parole, but father insisted that I could go about much freer and would not be subjected to so many interruptions by the guards around Old Point if I took the oath.

I went up to take the oath, and General Joseph R. Anderson, CSA, of the Tredegar Iron Works, a splendid looking man and soldier, was ahead of me, and I heard the questions asked him, and saw the manner of the (Federal) lieutenant, who felt his importance, and I became so indignant with the lieutenant and sorry for the general that when my time came I did not feel the humiliation and shame I expected.

Look around at the sight now. No people ever recuperated in such a short time. This whole section soon became a garden spot, and though most of the people had to lose even their land for security debts (often for the hire of slaves before the war), yet though not accustomed and often not really able to work, they made the best of the situation and determined if possible to start in life again and show the Yankees that they could live without their aid, and even without slaves or property.

I think the South believed that the North opposed slavery not so much because of their [abolitionists’] love for humanity as they pretended but because they were envious of the prosperity of the South and hated the aristocracy because they knew they were superior, and felt that their own mean pecuniary dealings and money-making propensity was condemned.

The South did not try to make money because money was the means by which they could elevate themselves, because they looked more to a man’s character and behavior than to his bank account.

The North had to work harder and live more economically to get along, and probably on this account they would take advantages and do little mean tricks which were looked upon by us as wanting in honor and honesty, and gentlemanly instincts.

The better classes of the North never visited the South, nor were the Southern people anxious to mingle with them at the North, so we grew wider apart every year. They hating and envying us more and more, and we looked down upon them.”