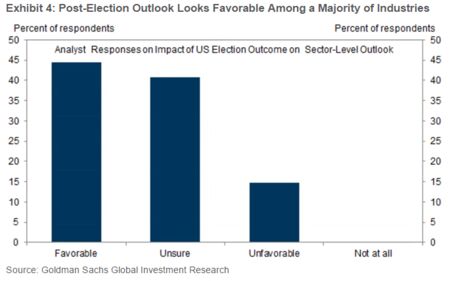 After years of slowing earnings growth and little in the way of excitement for many Wall Street analysts, many are now hopeful that President-elect Donald Trump will finally make things interesting.

When collating data for the Goldman Sachs Group Inc. Analyst Index — a proprietary measure of growth across different sectors of the S&P 500 — the firm included a question this month on what the election of Donald Trump will mean for the industries covered by those surveyed. Turns out, they are rather optimistic.

"This month, we asked analysts to comment on how the results of the U.S. election will affect companies in their respective sectors," the team led by Avisha Thakkar writes in the new note. "While their responses suggest that there is still uncertainty about the sector-level impact, the majority of sectors are anticipating favorable effects," they say, adding that expectations of lower tax rates and economic stimulus are among key reasons for the favorable outlook.