Will Jim Webb be Trump's secretary of Defense? 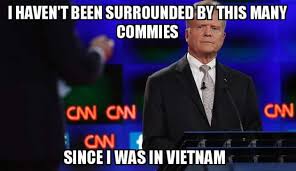 Jim Webb is, at least in a nominal sense, a Democrat. Last year, he briefly pursued the Democratic nomination for president, a run best remembered for his joke about killing the Vietnamese soldier who threw a grenade at him.

Now Webb is singing Donald Trump’s praises, and may have his eye on a cabinet job. “I would like salute Donald Trump for his tenacity and for the uniqueness of his campaign,” Webb during a speech to a hundred or so attendees at a foreign policy symposium in Washington, D.C. on Tuesday.

To hear Webb tell it, in fact, he tried to do what Trump did. “It took an outsider, whatever his wealth and lack of government experience, to tell the truth,” Webb said, before explaining that his own efforts in this regard were tripped up by his lack of wealth and an intransigent Democratic elite.