ANTIFA and BLM are pretextual names for movements better known as Marxist-Communists...... 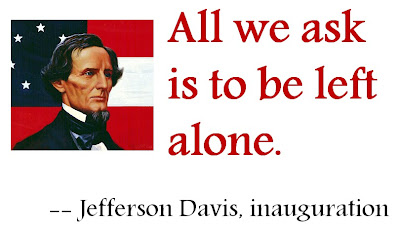 A friend and fellow SCV & SCV Mechanized Cavalry member named JD Montes posted this and it says better than I could say what I believe to be happening in our country right now. Read his words below:

.......They pick "low-hanging fruit" causes such as Confederate memorials to incense their base and draw support in preparation for an intentional bait-and-switch. In reality they are Anti-American, anti-liberty, unilateralists, pro-violence, pro-revenge and antithetical to the historical American experience.

Their goal is cultural revisionism and erasure of history like the NAZI ideology they falsely oppose. They are the modern American "NAZI" movement. Intent on tearing down our great Constitutional- Republic with fake causes intending to rebuild under their communist umbrella of suppression of the people, not freedom for people. They are fakes who will pivot from Confederate memorials to taking down images of US Founding Fathers. They already want to take down President Andrew Jacksons statue in Jacksonville Fl and they have a movement afoot to take down Thomas Jefferson on the Columbia University campus.

Make no mistake; their soil is Marxism under the disguise of opposing racism and bigotry only to grow cultural and ideological revisionism upon an unsuspecting citizenry. They are like Greek sirens calling people with their trumpets only to mislead them to more evil and insidious anti-americanism.

Sadly the American MSM is part of that movement; fully lying to the public while plotting their eventual takeover. They cannot take America by force from the outside, so they choose to take America from the inside. US President Abraham Lincoln was right about one thing: "“America will never be destroyed from the outside. If we falter and lose our freedoms, it will be because we destroyed ourselves.” So it is today.

The ACLU and the and other civil liberty organizations supported yesterday's rally in the name of free speech. The Federal court granted permit to the organizers only to have a city council attempt to force them to move their lawful assembly miles outside of town due to (you guessed it: ANTIFA and BLM dissent). But real liberty, Liberals argue, does not recognize only speech with which you agree. It recognizes and protects that speech. So what have we here?

We have the suppression of a rally only because of disagreement with their message of keeping the memorials standing while the real "haters" spread their divisive message of tearing down veterans memorials across this land to serve their false intent.

If history is to record the past, then let it record the past for the good of the future. Should we erase history because it does not comport with our sensitivities, taste or flavor. Maybe we should outlaw all ice cream except chocolate. But frankly taste and opinion are personal. So if sensitivity and opinions are a fluid concept in the liberal mind, why would a political party like Democrats buy into Marxism leading to Communism? Because it suits their political agenda, all the while unknowingly (or maybe knowingly) selling out American ideals of capitalism and individual liberty to movements like ANTIFA and BLM.

These memorials, these monuments were gifts to Southern states who fought for a cause that was self-preservation. The rally cry of the Marxists is that its all about slavery. But to say that 'slavery' was the primary cause in and of itself is too easy, too simple, too unthinking. Rather a pervasive examination of the American political and economic machine in the early days of this nation is required to truly understand "The Cause". The American War between the states was no more solely about slavery than just being solely about battles and men, but moreso, that slavery was merely a singular subelement of broader reasons of self government and true constitutionalism. That, my friends, is truly American? Where is George Washington when I need him?

I am not justifying slavery, but I am stating that slavery was not the primary cause of any "civil war". It is but a convenient term given to us by the victors because its sounds moral, holy and worthy in a war that the North was losing until Lincoln's self-reluctant Emancipation Proclamation made it a moral battle. This war was about keeping the Union together at all costs in his eyes. So sound bites, digitized words, photos, and singularly defined negative words do no justice to the history of this nation's greatest internal conflict. It does no justice to the sons, fathers and families that gave the ultimate sacrifice to their state when duty called. These monuments are to dead veterans who fought for their homeland states --- something we today truly understand politically and know little about without deeper examination in a historical context. Frankly, they are all veterans...AMERICAN veterans as declared by the US Congress in the 1950s. They were brothers vs brothers and fathers vs fathers. These memorials should be protected and embraced like the prodigal son; not eschewed and reviled.

In the end, this isn't about racism or bigotry from an inanimate object standing silently in a park or courthouse lawn. It is about whether this nation will live up to its constitutional principles and ideals of free speech or do we embrace the false and darker path of allowing unilateral opinion to destroy Southern history which is really American history.

Do we really believe in our Constitution? Or are we just lapdogs for every PC movement that comes along with faux causes disguised in pretty verbiage that really intend to attack our Constitutional form of government under false pretense of defying racism and bigotry?

Better yet, are WE for it? If so this social experiment built on individual liberty and freedom...it wont last much longer.

I say, Herman Goebbels would be proud of these intentionally fake movements.