Those Who Seek Power 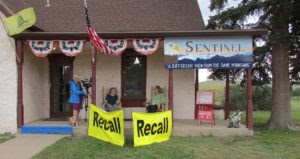 The recall effort in Custer County, Colorado is more than a small town problem being dealt with, it is instructive as to how politics in this nation must be done. It is self defense, it is defending the homestead from invaders, because if you realize that these county commissioners had drafted legislation and were intent on pursuing a policy whereby a person could be jailed for repairing a broken outdoor light fixture (typically a yard light on a farm or ranch) in the interest of perhaps 6 or 7 other collectivists who wanted to eliminate "light pollution" in a rural mountain village and surrounding county and still think that the overwhelming majority shouldn't toss them out on their ears, then we will never understand each other. And, to the degree that this course of action might be emulated elsewhere, where the collectivist hooks be extracted by legal force, this is a good thing.

Collectivists operate by deception, it is their trademark, and these three individuals, having secured their seats one at a time, masquerading as conservatives to a largely disinterested population with much more to worry about than the actions of a county commission sworn to defend the Constitution, simply picked a few "Rs" on the list and gave it no more thought, until the Trojan Horse candidates revealed themselves for their true natures.