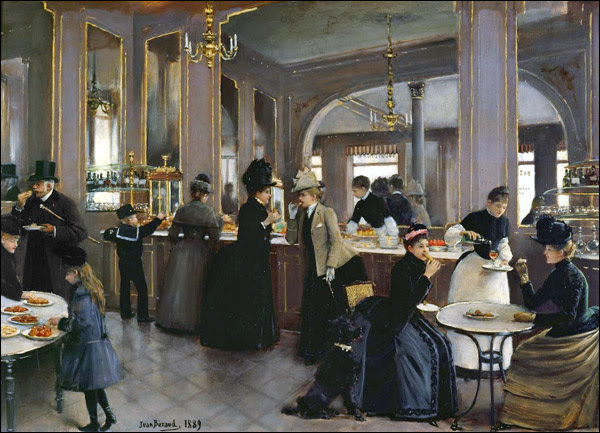 A pastry shop in 1889 Paris, painted when Beraud blended salon and impressionist styles, which was most of the time, albeit with a life-long shift towards the latter. I rate Jean Beraud's stuff as a solid "okay" with an occasional lunge at "pretty good". Beraud lived until 1935.

Family, Return of Kings - The Cultural Marxists know that in order to destroy America they have to annihilate the concept of a strong father figure and they have to make obsolete the icon of a loving mother, of a home life and childhood that is wholesome. To all you young players out there, I’m not ignorant to what the game has become. I will encourage you however to have a dream. There’s a pretty girl out there who has an education, can cook, does not leave her clothes all over the floor like you do, has a loving relationship with her father (who’s respect you must earn, sorry!), respects you and can be your best friend, lover, companion, wife and who will be a good mother to your children. You will someday grow old, don’t do it alone.

Education, Taki's Magazine - At the secondary level, boys should be taught by men. Student gender segregation also is desirable. And it would be silly to perceive “sexism” or “misogyny” here. We have seen the consequences of an education system dominated by women: boys put on drugs because they are boys and made to feel guilty about themselves for the same reason. It would be far better for a boy to have no education at all than to undergo a feminized one. The present system is the way to destroy a country; it is emphatically not a path to excellence. Excellence, both of mind and character, was the purpose of education as it was classically conceived.

Tyrants, Z Man - Social media companies hire petty tyrants, sadists and mentally disturbed spinsters, give them a job reading the internet, looking for “hate speech”. These are people who relish the task, because it is the only time anyone notices them. Our public space is turning into a daycare center run by sadistic schoolmarms. The people in charge of social media firms truly think they can regulate what the world has to say about things. There’s no way to stifle dissent. The only thing that comes from efforts to do so is a violent response. But, the petty tyrants will only learn that lesson when the next Persian vegan shows up at their door.

Terrible person, Taki's Magazine - Please let me do penance, or probation, or social-media jail, or whatever form of public horsewhipping is necessary to transform me from a self-righteous privileged Neanderthal to a craven apologetic humiliated loser crawling around on my knees trying to convince people that I Get It Now, I was wrong, I’ll go to rehab, that wasn’t the real me, I’m donating my salary to homeless drunk Eskimos in Juneau. I hate me. Everything I do is an offense against helpless underrepresented demographic groups that will now assert their moral superiority and kill me. I hope someone invites me to be the commencement speaker at Bard College next year just so I can be disinvited and humiliated.

The problem with "white privilege" is there isn't enough of it.

Daily Mail - Pensioner, 78, arrested on suspicion of murder after 'stabbing armed burglar, 38, to death in struggle in his kitchen' when two intruders woke him as he slept next to his wife ... the other one got away

They knowingly allow Moslem gangs to kidnap their preteen daughters and force them into sex slavery. Now an elderly man is arrested for defending his life in his own home. In the end, what was their "finest hour" for?