Silent Sam and the Recurrence To Fundamental Principles 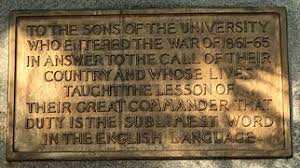 The statue and monument to the students of the University of North Carolina, who served North Carolina in the cause of the Confederacy, has been much on the minds of many lately, first with mere attempts at removal, and finally with the actual toppling by a mob. Silent Sam has been subject of derision and controversy for some time, going back at least 50 years. The mob, aided and abetted by the University administration, student government, and Chapel Hill Town Hall, whipped itself into a frenzy, and rioted in Sam's quiet corner of the campus. He was defenseless!

Raucous debates on college campus have become the norm of late under mob rule, with riots breaking out over speeches that are increasingly not heard because threats of violence halt speech before it can be given. West coast schools are becoming famous for shutting down free speech, particularly when the speakers suffer the taint of conservative inclination. But when loud and lively speech becomes wanton acts of vandalism against property, a line is crossed, and an injury has occurred and must be addressed.