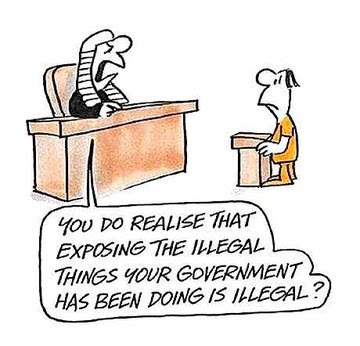 “If Julian Assange is criminalized and incarcerated for revealing the truth about what our rulers are doing, have done, then you might as well deliver yourself behind those walls, you might as well volunteer for a prison cell yourself, because you’ll no longer be free, and you’ll never be free again.”
George Galloway

Let’s be sure that we understand that Assange is not charged with anything related to Russia or Russiagate or even with breaking a law. Assange is charged with being in a conspiracy with Manning “to commit computer intrusion.” The charge is not that Assange succeeded in hacking a government computer and obtaining classified information. It merely says that Assange discussed the possibility with Manning and had an intention to hack a computer. Most likely, even this noncrime is an invention of prosecutors instructed to indict Assange in the absence of any evidence. It is all that they could come up with.