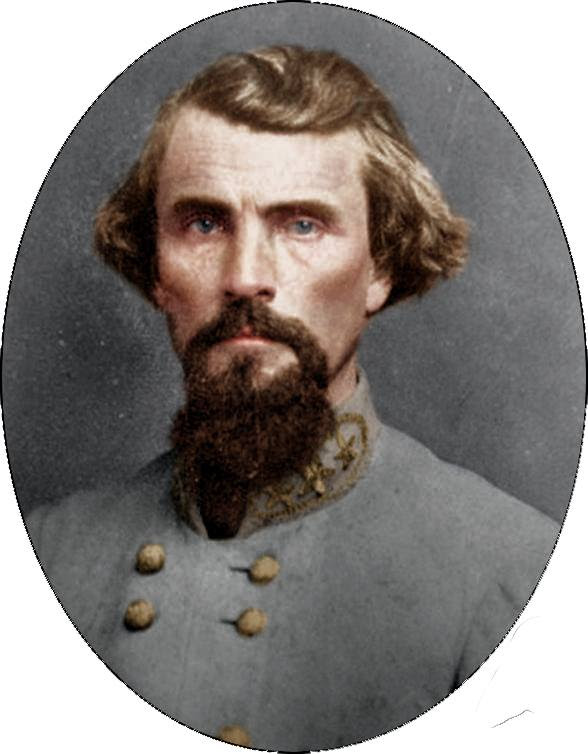 US Army Air Corps Brigadier General. He was the first American General Officer killed in combat against the Nazis during World War II. His plane was shot down over the Baltic Sea while participating in a B-17 bomber raid on Kiel, Germany.

(His family was presented his Distinguished Flying Cross, which he was awarded posthumously for staying at the controls of his B-17 bomber while his crew bailed out.[2] The plane exploded before Forrest could bail out. By the time the Seenotdienst (the German air-sea rescue) arrived, only one of the crew was still alive in the water.)

A 1928 graduate of West Point, he served as Second Air Force Chief of Staff prior to transfer to the U.S. Eighth Air Force in England. His body was recovered and buried by the Germans, after washing up at a seaplane base, in a small cemetery in Wier, Germany. He was the great-grandson of Confederate Lt. General Nathan Bedford Forrest. In 1949, his body was returned from Germany and reburied in Arlington at the request of his wife, Frances Brassler Forrest Martin.

This essay was published as a new introduction for Lytle’s Bedford Forrest and His Critter Company and is published here in honor of Forrest’s birthday, July 13.

This is a young man’s book. To have anything more to say about a book you did fifty odd years ago brings you hard up against the matter of time. The young author shows a familiar visage, as enigmatic as the portrait of a great-grandfather “struck” in his youth, gazing into the close air of the parlor. You know you are kin, but that youth belongs to the ancestors. Therefore to redo or revise in any real sense would mean to make another book. Fifty years can change more than the use and control of language. The world may go on for a thousand years and, outwardly at least, be always the same.

Then something appears out of nowhere, so sudden does it seem, and a shattering takes place; as for example when the stirrup was introduced into Russia by the Sarmations riding out of Siberia. They stopped with the conquest of Russia, but the stirrup did not stop there. The Goths took it into Rome.

It ended the stalemate between the mounted archers of Parthia and the Roman legion. It had its long history in Europe. It came to an end as an instrument of military power about a hundred years ago in Alabama.