This isn’t about sneakers, but about people who want ‘no USA at all’ 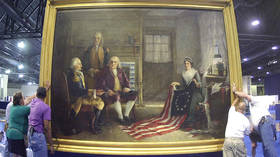 In just a few short years, the woke crusade against “hate” in the US has gone from demanding the removal of Confederate flags and monuments to targeting George Washington, the national anthem and now even the American flag.
Seen in isolation, the decision by Nike to scrap their sneaker design featuring the original flag of the 13 colonies that declared independence from the British crown in 1776 – reportedly at the urging of ex-football player turned social justice commissar Colin Kaepernick – seems like a tempest in a teapot. Seen from another perspective, though, it’s an alarming example of a trend that threatens to unravel the few remaining threads that keep America together.