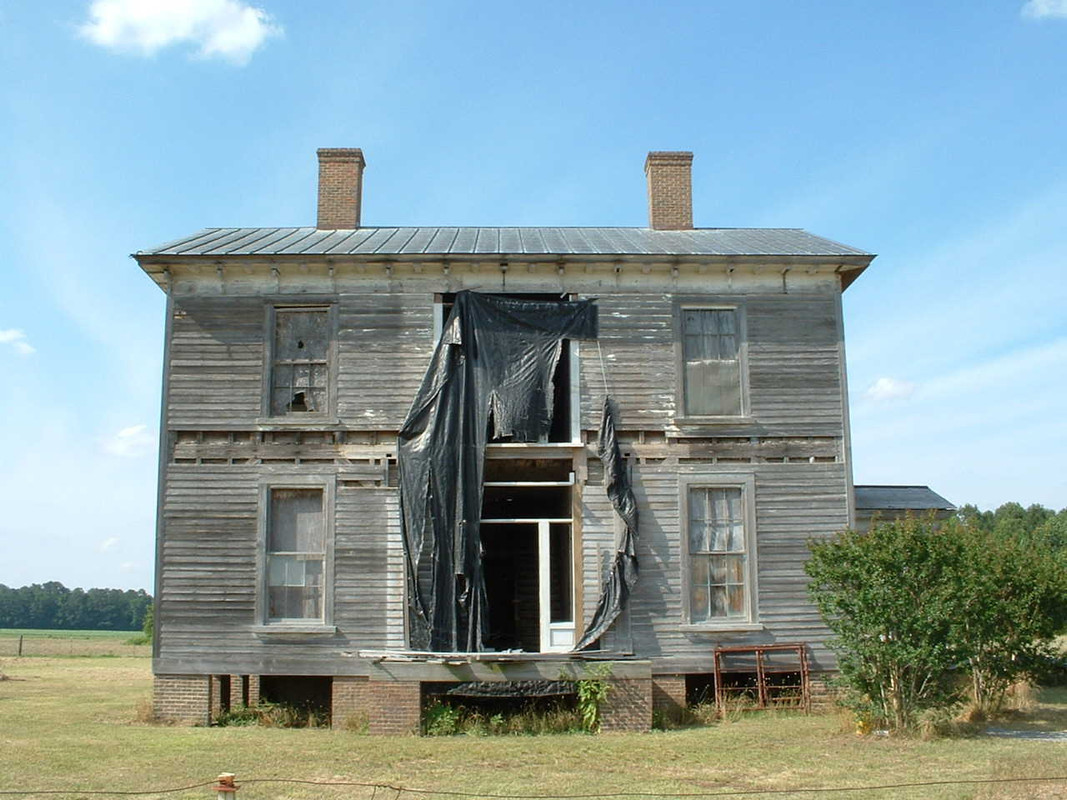 
(A picture to go with the story. A newly found cousin, * & **Ed Harrell, took me here a few days after our 2010 Pippen Reunion. Under restoration, the brick foundation, and the two chimneys which are used by the eight fireplaces, are all new. I could not find any rot on all the exposed, weathered boards! Just amazing. BT)

*Ed said that when Aunt Bithiah's daughters, would go out that the buggy was brought around to the side porch (You can see the roof above the large bush on the right) so that the girl's feet would not have to touch the ground.
--------

"A company of Yankee troops, foraging for food, came to the plantation. A faithful old darkey had already taken the carriage horses and hidden them in Ward's Swamp, near the house, and had hidden the family silver down in the well. The Yankee troops killed every chicken and hog on the place and were cooking in the big iron wash-pot in the yard. About this time, other soldiers discovered casks of apple brandy stored in the gin-house, had broken into them and gotten royally drunk. It was a very anxious moment at this time for Bithiah Pippen (Brown). None of her daughters were married then, with the possibility of Aunt Kate who married **Kenneth Harrell, the other girls were all at home and the boys were away in the Confederate Army. Lunsford Brown was dead and Bithiah was in charge of the plantation. She locked the girls in an upstairs room and went out on the porch, under the big tall white columns, and met the leader of the troops. He was a young Yankee officer, nicely mannered, and after dismounting came to the front steps and very respectfully told the lone woman that he regretted the havoc his troops had made of the place, that he had ordered them to break open the remaining casks of brandy and cider and pour them out, as his troops were getting out of hand. This officer told Bithiah that his own home was in Massachusetts and that she reminded him of his own mother whom he had not seen for two years. After offering her protection for herself and daughters Bethiah invited him into her own dining room and had her cook prepare dinner for the Yankee officer and several of his staff. In this way the old mansion was saved, just in time as sacks soaked with kerosene had already been placed under the front porch by the Yankee soldiers. When the troops departed they took every scrap of food with them, and neighbors had to bring the family what food they could find from their own slim stores."

September 12, 2010
An addition of a post by Faye on BelleGrove. Just priceless! BT

"One of the only memories I have of going to my granny's house was her big hug and her molasses cookies. My grandfather died when I was 4 and Granny moved in with the children. She is the one who told me her tales of her family and the Civil War. I thought it was the Silver War when I was little because she would tell about them hiding the silver in the well!"