Report: Mark Milley Told Military Officials Not to Take Orders After Capitol Riot & How Do You Spell Traitor. 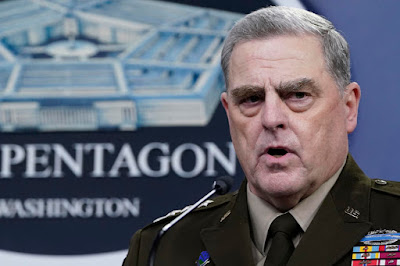 A man with no honor any longer

How do You Spell Traitor - Milley

The Staff: To think this man belongs in the military command is joke. This clown listens to another nut job named Pelosi and believes she shows he must be removed. It is no wonder we are now seen as weak and ready to fall.

According to Peril by Bob Woodward and Robert Costa, Milley was worried that after the January 6 Capitol breach, Trump could “go rogue” and called a secret meeting on January 8 with senior military leaders.

During that meeting, Milley instructed senior military officials in charge of the National Military Command Center to not take orders from anyone unless he was involved, according to a write-up of the book by CNN.