Via Resistor In The Rockies

I read this over at Freerepublic.com:

I heard this today.

Sheriff Terry Maketa of El Paso County, CO is going to press for an investigation against the Democrat leadership for extortion and influencing public, elected officials. The Dems are angry at the very large group of state sheriffs who testified against the anti-gun legislation. Sheriff Maketa made his serious statements on the radio station KVOR, the Jeff Crank show, in Colorado Springs between 9:30 - 10:00 AM. He will file charges with the Colorado State Attorney General's office. Sheriff Maketa got an email from the Dem leadership to back off and change their collective positions on gun control or the Democrat legislature would hold up or stop legislation that effects sheriff's pay throughout Colorado. Sheriff Maketa went on to say that this threat to pay does not effect him personally, but does other sheriffs in the state. 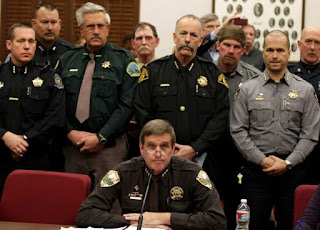 More @ Resistor In The Rockies
Posted by Brock Townsend at Sunday, March 10, 2013