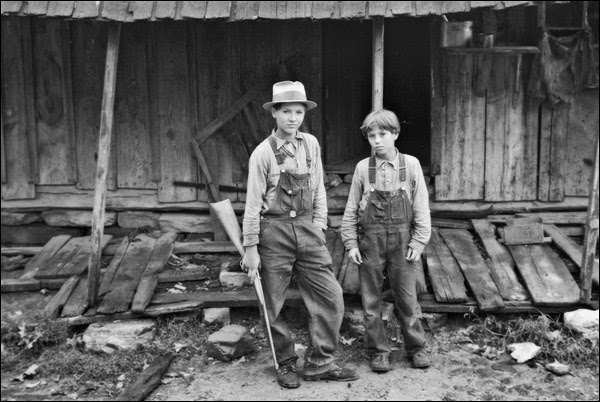 1935, children of an Arkansas tenant farmer

"Can you use a 3D printer to print a gun?" The answer to that question might come sooner than anybody expected, as Wilson says he will 3D-print an entire handgun in just a couple of weeks. If Wilson does print an entire handgun, he will reach a milestone that many thought couldn't be reached so soon, says Lorenzo Bicchierai in this article, 3D-Printed Weapons Builder Says He's Ready to Print Entire Handgun, at Mashable.

A Skokie, Illinois police officer engaged in a gun battle with a Gangster Disciple bank robber, one highly motivated bad guy, took 13 hits from a .45 auto – including six fatals – before a trio of head shots finally put him out of the fight 56 seconds into it, in this article, Why you carry extra ammo and full capacity magazines, at Jews For The Preservation of Firearms Ownership.

B-2 stealth bombers are currently dropping leaflets over the city of Pyongyang warning its citizens of an impending attack. At the time of this posting, the U.S. government or its military has not made a statement regarding this late breaking story. CNN has obtained a copy of the leaflet.
DB at investmentwatchblog.com

Housing is consumption, a bridge to nowhere is consumption, particle board shelving is consumption, and a $180,000 bachelor's degree in a field of study with near-zero economic premium in the real economy is also consumption. The Keynesian Cultists and their fellow apologists/neofeudal apparatchiks attempt to mystify this consumption by labeling it "investment." The misdirection may fool craven politicos seeking to buy votes, but the real world is not fooled.
Charles Smith at oftwominds.com

Ayers recalled the fundraiser: "We were friendly, that was true; we served on a couple of boards together, that was true; he held a fundraiser in our living room, that was true." It was all true, everything that was said about Obama and Ayers back in 2008 that was denied is all true, and Ayers has now admitted it.
Rush Limbaugh at gulagbound.com
Posted by Brock Townsend at Monday, April 29, 2013