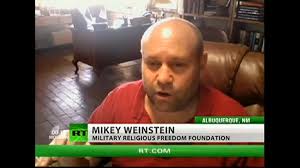 On April 16th, in an article written for The Huffington Post, Mikey Weinstein says some pretty incredible things. He takes a machete to Christians and Christianity in general; rather happily slicing his way through the Christian faith and those who practice it. The following is an excerpt. It’s a bit long, but worth the read:


“Ladies and Gentlemen, let me tell you of monsters and monstrous wrongs. And let me tell you what these bloody monsters thrive on…I founded the…Military Religious Freedom Foundation to do one thing: fight those monsters who would tear down the Constitutionally-mandated wall separating church and state in the technologically most lethal entity ever created by humankind, the U.S. military…Today, we face incredibly well-funded gangs of fundamentalist Christian monsters who terrorize their fellow Americans by forcing their weaponized and twisted version of Christianity upon their helpless subordinates in our nation’s armed forces…These days, when ANYone attempts to bravely stand up against virulent religious oppression, these monstrosities cry out alligator tears in overflowing torrents and scream that it is, in fact, THEY who are the dispossessed, bereft and oppressed. C’mon, really, you pitiable unconstitutional carpetbaggers?

… Please, I beseech you! Let us call these ignoble actions what they are: the senseless and cowardly squallings of human monsters…Queasy with the bright and promising lights of the cultural realities of the present day, those evil, fundamentalist Christian creatures and their spiritual heirs have taken refuge behind flimsy, well-worn, gauze-like euphemistic facades such as ‘family values’ and ‘religious liberty.’”

Mikey goes on to compare Christians with 60′s era racists, and rip apart Christianity in the military and in general. He even suggests that chaplains who proselytize are ”treasonous,” and should be punished. Finally, he calls Christian ministry in the military “spiritual rape;” comparing it to physical, sexual assault.