NC: Dorkhead Barber and 16 others arrested at General Assembly protest 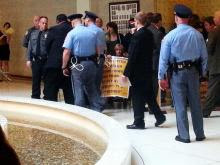 Seventeen people were arrested Monday evening during what the state chapter of the NAACP called a nonviolent "pray in" protest at the General Assembly.

The protest was directed at Republican action on health care, unemployment benefits, education and voting rights. The House passed a bill last week requiring voters to show photo identification at the polls, which the NAACP views as a poll tax.