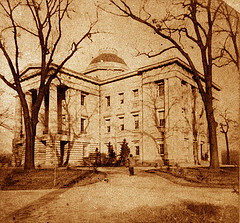 20 may 1861: The Second and Crowning declaration and act of independence for the old state”

The legislature set May 13th as election day for delegates to a State convention that would convene at 11AM on May 20th, the very day when, in 1775, North Carolina revolutionaries had signed the Mecklenburg Declaration of Independence and declared themselves a free and independent people. In precipitating war with North Carolina, the Lincoln regime had already begun blockading its coast---an act of war---even before the legislature had convened. This left little to discuss.

On May 20th, 122 delegates filed into the southern wing of the State Capitol to decide whether the Old North State would join 10 other Southern States already out of the old Union. With the galleries crammed with onlookers, the delegates argued the merits of leaving the union or remaining a member despite the threatening federal agent.

The April 17th secession of Virginia caused even staunch Unionists in North Carolina to accept the inevitability of a break with Washington, and debate ended at 6PM when by unanimous vote, the convention adopted an Ordinance of Secession, penned and presented by Burton Craige of Salisbury at the request of Governor Ellis.  Craige was a strong Southern rights advocate as was part of the 1860 Goldsboro convention of the Southern Rights party which called for North Carolina’s secession.

Though rejecting a lengthy document which enumerated the reasons and justifications for North Carolina’s sovereign action, including Lincoln’s unconstitutional and coercive actions against the States, Craige’s ordinance simply repealed the one in 1789 by which the State had voluntarily joined the second union.

Immediately after passage of the Ordinance, Major Graham Davee, private secretary to Governor Ellis, threw open a window on the west side of the building and related the news to Ellis Artillery Captain Stephen Dodson Ramseur. One hundred cadenced discharges marked the occasion of North Carolina reclaiming her independence; and this was followed by a ten-gun salute to the other independent States.  Within a short time it was announced that the convention had adopted the Constitution of the Confederate States, whereupon a twenty-gun salute was commenced.

May 20th was a much-revered date in North Carolina---Ada Amelia’s Diary entry of Tuesday, May 21st, 1861 mentions “the centenary celebration is near at hand. It is likely to be hereafter marked by a still more solemn and important event in the history of the State. It will be known, we trust, as the anniversary not only of the first, but of the second and crowning declaration and act of independence for the old State.”
Posted by Brock Townsend at Monday, May 20, 2013