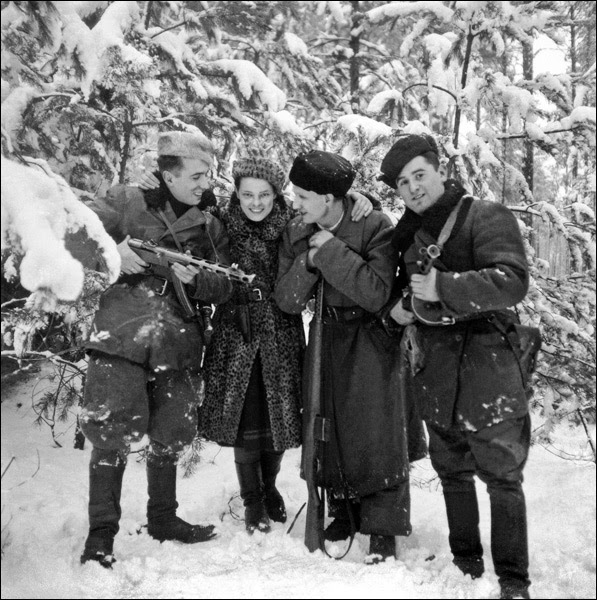 Winter of 1944 in the forests near Lenin Poland on the Russian-Polish border, now Belarus. Safe gun handling was not a priority.


The unlikliest partisan
In August 1942 the Polish town of Lenin's roughly 2000 Jewish residents were executed by Nazi forces, with the exception of about two dozen, including Faye Schulman. She was a photographer and was ordered to take and develop pictures of the mass execution.

She did so, including a second set in secret to keep herself. During a partisan raid she was able to escape into the forests and join the Molotava Brigade of Jews and escaped Russian POWs, where she served as nurse, photographer and fighter until the end of the war. She's lived in Canada since 1948.
Data and photo from Forgotten Weapons

Don't tell Chuck Schumer or Steve Israel, but you can bypass most of the problems with a printed gun by printing it to common PLA plastic and then using the PLA part as a pattern for a mold. Add a couple of wax sprues and risers and embed the whole megillah in a plaster-sand mixture. You then melt the PLA out, and cast metal in. One of the real applications for these printers is in printing casting patterns.
weaponsman.com

What is perhaps most disturbing is the sheer effrontery of the administration. They seem unabashed and oblivious to the damage they are causing. They are telling lies that nobody can be expected to believe, almost as if the stranger hiding under the marital bed explains that he's looking for change he dropped there. He doesn't actually expect you to believe it. What he wants to know is whether you're man enough to call him on it.
Richard Fernandez at pjmedia.com

In the 1942 Wickard v. Filburn case, the Supreme Court ruled that laws regulating how much wheat a farmer could grow on his land apply even to grain grown for consumption at his own dinner table, because if he had not grown it, he would have had to buy it, thus "affecting commerce." Since then, incredibly, the perversity has only grown worse. The Supreme Court has ruled, at the federal government's behest, that since homegrown marijuana reduces demand for marijuana commerce—which Congress has already decreed must not be engaged in any way—interstate commerce is "affected," and Congress has a right to regulate it.
Kurt Hofmann at examiner.com

I want to draw your attention to the recent drop in corporate revenues at a number of corporations including Proctor and Gamble, Starbucks, AT&T, CB Richard Ellis, Safeway, American Express, IBM... If you look at the real economy, things are getting worse and worse. When even Wal-Mart reports that people are spending less (remember that corporate email that February sales were a "disaster"?) you KNOW things are bad. Folks, something awful is brewing in the economy. And yet, against this backdrop, stocks continue to rally hard. This bubble is worse than anything I've seen in my career, including the 2007 top.
Graham Summers, Phoenix Capital Research via zerohedge.com

Boston bombing - We already know that terrorist Dzhokhar Tsarnaev was shot up by Boston’s finest as he cowered in a boat without a weapon. Now we have confirmation that the cops shot up the wrong vehicle (but couldn’t shoot straight enough to hit the innocent citizens) the police officer wounded and nearly killed in the shootout with the Tsarnaev brothers wasn't shot by the poorly-equipped terrorists, but was instead blasted by other poorly-trained cops.
Bob Owens at bob-owens.com
Posted by Brock Townsend at Monday, May 20, 2013