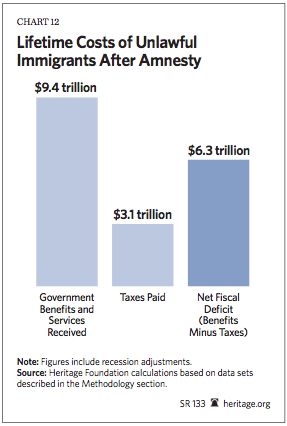 The Heritage Foundation has just released its cost estimate for the Amnesty portion only of the Schumer-Rubio or "Gang-of-Eight" U.S. Senate  "comprehensive immigration  reform" bill, S.447.  The Heritage report's author, Robert Rector, believes $6.3 Trillion is a conservative minimal estimate.

Adding $6.3 Trillion to an already dangerous $16.5 Trillion debt is reason enough for public alarm or for any sane member of Congress to vote against it. However, the Schumer-Rubio Senate bill contains far more special interest goodies than amnesty, as disastrous as amnesty for 11 million illegal immigrants would be.

The Senate bill also contains recommendations for massive new legal immigration and temporary guest-worker authorizations. Permanent legal immigration would be authorized to increase from 1.1 million to 2.6 million annually.  The pre-1986 amnesty years averaged 300 to 500 thousand. Guest-worker authorizations could increase from the present level of just over 900,000 to 2.7 to 3.0 million. Because the 1965 Immigration Reform Act, with its extended family priorities, will continue to be in effect, most of these could be expected to be low-skilled and to have similar public cost liabilities to Rector's per person estimate for amnestied illegal immigrants.

In addition, Rector's estimate does not anticipate the huge multiplier effect of past amnesties, although law enforcement is likely to be even more negligible, and for show only, as long as Barack Obama or a like-minded liberal Democrat or liberal Republican holds the office of U.S. President.

NumbersUSA recently estimated that 33 million more foreign workers will be coming to the U.S. in the next 10 years, if Schumer-Rubio is passed. This includes not only the amnestied immigrants but the usual train of relatives and millions more likely to take advantage of what amounts to a surrender to open-door immigration policies. Thus the Heritage Foundation's estimate excludes a multiplier effect that brought two to three more illegal immigrants for every past amnesty.

Hence the Heritage Foundation's $6.3 Trillion cost estimate may be far short of the total cost of the near open-door immigration policies proposed by Schumer-Rubio.

The total fiscal and economic cost of Schumer-Rubio is beyond estimation and imagination. It is a totally insane and irresponsible national suicide bill. Hamas, Hezbollah, Al Qaeda terrorist leaders
would be hard pressed to come up with a more destructive plan for America.

With over 21 million Americans wanting a full-time job and unable to find one, flooding the job market with amnestied illegals, millions of their relatives, and millions of new guest-workers seems like a plan straight from a madhouse or the command post of hell.

Details of the $6.3 Trillion amnesty cost can be found on the Heritage Foundation website.
Posted by Brock Townsend at Monday, May 06, 2013