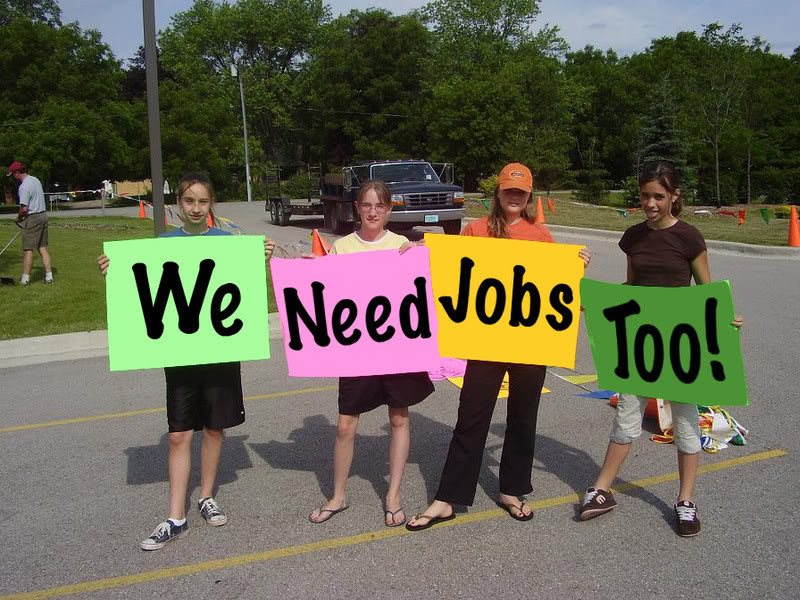 A common excuse for being tolerant of illegal immigration is: “They’re just doing jobs Americans won’t do.”  This opinion is only held by a minority of American voters, but it a common claim of those who use and profit from cheap foreign labor, both illegal and legal. However, studies of the national employment situation show no credible evidence that there is much truth to this claim. The evidence is very strong, moreover, that importation of cheap foreign labor, whether illegal or legalized guestworkers displaces American workers and depresses their wages.

On the other hand, there are many local instances where employers become frustrated trying to hire employees to do work that requires strenuous or monotonous labor or some undesirable working conditions. Since these jobs often require little education and low-skill levels, low pay and few benefits are frequently a factor. But there is also another factor called “stigmatization,” noted in the Jordan Commission study of immigration in its 1997 report to Congress. Once a local company or industry fills up a job category with lower paid foreign workers, the occupation becomes “stigmatized.” The natives are reluctant to take these jobs because they feel the respective occupation is for poorly educated and unskilled foreigners and has no promise of economic betterment. Both a loss of social self-worth and poor economic promise are factors.

Furthermore, the natives may feel the employers only want foreign labor and will not seriously consider anyone else. This situation breeds cheap foreign labor dependence.

As many American labor economists have pointed out, however, there are no jobs where the market is strictly local. Only national or at least regional economic labor markets reflect a true measure of the interaction between supply and demand with wage levels.

In any legitimate economic analysis, one fundamental law of free markets must be kept in mind. Excess supply causes prices or wages to fall, and shortages cause prices and wages to rise.

When we see employers, business associations, and politicians claiming there is a labor shortage and that more foreign labor must be imported, yet wage rates are stagnant or declining, we had better dust off our Baloney Meter. Sadly, this is just what we have in the Gang-of-Eight Amnesty and stupendous guest-worker expansion plan known as Schumer-Rubio or Senate bill S.477. Republican Senators Marco Rubio and John McCain are claiming S.477 is justified by a labor shortage—absolute nonsense! The real wages of American workers have been stagnant for 15 years, and 21 million Americans who want a full time job cannot find one.  NumbersUSA recently projected that S.477 will bring in 33 million more immigrant laborers over the next ten years. Contemplate what impact that will have on the welfare of American workers and their families!

A study by the Bureau of Labor Statistics for the years 2009 through 2011 found that only six of 497 occupations or occupational categories were majority immigrant (legal and illegal). These were: (1) Graders and sorters of agricultural products, 63 percent immigrant; (2) Personal appearance workers (doing fingernails, toenails, etc), 59 percent; (3) Plasterers and stucco masons, 56 percent; (4) Sewing machine operators, 52 percent; (5) Miscellaneous agricultural workers (the largest category), 52 percent; and (6) Tailors, dressmakers, and sewers, at 52 percent. Note that in all six occupations, there are plenty of Americans still doing the work—in geographic areas where they have not been driven out by increasing importation of illegal immigrants and guestworkers.

Those who want to see the details of this study can consult the May 2013 Backgrounder published by the Center for Immigration Studies (cis.org). The statistics also show the native unemployment for each occupation. All have above average native unemployment, particularly agricultural sorters with 28 percent, plasterers and stucco masons with 27 percent, and sewing machine operators and miscellaneous agricultural workers each with 16 percent. Hence there is no such thing as a job Americans won’t do. This can have differing local manifestations, but the national truth is that the often-repeated phrase, “jobs Americans won’t do” is largely a propaganda ploy by business associations and their political allies lobbying for more cheap foreign labor.

What is going on here?  We have seen from the studies of Harvard Labor Economist George Borjas that excess foreign labor is costing American workers $402 billion or $2800 per worker per year, but profiting the users of imported foreign labor $437 billion per year. The proponents of cheap foreign labor are spending $300 million per year to lobby Congress. These lobbyists frequently point out that foreign workers contribute $1.6 trillion to the GNP. The problem with this accounting is that almost all of that goes to the foreign workers, and the net $35 billion national gain is overcome by much larger fiscal costs, which are somewhere between $84 to $110 billion per year for illegal labor alone. The bottom line here is that foreign workers are profiting, and those who are using them are profiting handsomely, but American workers and taxpayers are getting the economic and political shaft. Yet public and media blindness to this unfair and unpatriotic political evil is astonishing.