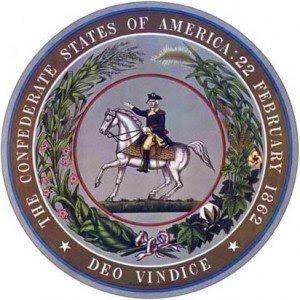 Before the 1860 political campaign many of the overstretched bands holding the United States together had been broken; the John Brown raid of 1859 convinced the South that a more perfect union with the North was not practical.  President James Buchanan’s noble speech of the time rightly noted that “Our Union rests upon public opinion, and can never be cemented by the blood of its citizens shed in civil war. If it cannot live in the affections of the people, it must one day perish.  Congress possesses many means of preserving it by conciliation; but the sword was not placed in their hands to preserve it by force.”
Bernhard Thuersam, Chairman
North Carolina War Between the States Sesquicentennial Commission
www.ncwbts150.com
"The Official Website of the North Carolina WBTS Sesquicentennial"

“In surveying the secession movement of the lower South, the evidence points to the conclusion that it was not a conspiracy of a few leaders, but a genuinely popular movement. It is true that minorities in Alabama, Georgia, Louisiana, and Texas were opposed to immediate secession.  Yet the Southern people had contemplated the probability of dissolving the Union for ten years, and had debated the pros and cons in countless debates.

The wave of rejoicing throughout the lower South which followed the passage of the secession ordinances indicated a deep popular approval. The common people of the South, except in the mountain and hilly area which jutted into the South from Pennsylvania, agreed with the aristocrats that the victory of the Republican party was a danger to Southern society which must be met by secession.

The rise of this new [Confederate] nation was a part of that romantic nationalism of the mid-nineteenth century which was agitating Europe.  At last the dream of Southern nationality….seemed to be realized – the romantic vision expressed by Langdon Cheves ten years earlier at the Nashville Convention: “Unite and you shall form one of the most splendid empires on which the sun ever shone.”

The secession of the lower South marks the end of a long period of sectional adjustment by the fine art of compromise.  The exercise of this art is indispensible in a democratic country like the United States, containing regions with clashing economic interests and difficult race problems.

Traces of old sectional animosity have survived below the Potomac…..Today [1949] the South remains the most self-conscious of American sections and fro years to come is likely to preserve its deep regional feeling.  Such a state of feeling may be a powerful force for good, since it resists the standardization of life in America.

The true function of this regionalism is to preserve the rich variety of life in the United States, which is so stimulating to the development of literature, art, and intellectual activity.”