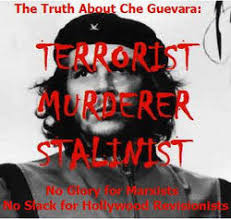 When Sen. Marco Rubio, R-Fla., chastised Jay-Z and Beyonce in a TV interview for their recent trip to Cuba, he especially criticized Jay-Z for his adoration of Che Guevara.

Jay-Z, Carlos Santana, and Johnny Depp — who have all been spotted in Guevara t-shirts in the last decade — have, as Rubio correctly noted, largely ignored the issue. Yet, some leftist defenders of Guevara do occasionally deal with this troubling issue. A blogger named Faraji Toure at “Afro-Punk” a notes a troubling passage from Guevara’s 1952 diary:

“The blacks, those magnificent examples of the African race who have maintained their racial purity thanks to their lack of an affinity with bathing, have seen their territory invaded by a new kind of slave: the Portuguese.”

And: “The black is indolent and a dreamer; spending his meager wage on frivolity or drink; the European has a tradition of work and saving, which has pursued him as far as this corner of America and drives him to advance himself, even independently of his own individual aspirations.”