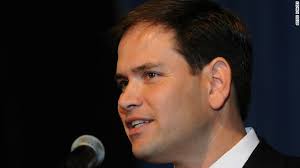 As he continues to go downhill.

I have been saying that this ‘Gang of Ocho’ immigration reform bill would be dead in the water the minute the liberal faction in the U.S. Senate began to do President Obama’s bidding of mucking imposing their liberal views on the legislation.

Rubio had been warned that this would happen, and it has. Senator Patrick Leahy (D-VT) has filed two amendments that acknowledge same-sex marriage. Rubio recently said that that if his bill was amended with such a measure, he would not support the bill anymore.

This move by the Democrats gives Rubio that immigration reform life raft he needed.

This is the immigration excrement that the liberal Democrats in the Senate and President Obama wanted Rubio to step into all along. Democrats like Schumer would get Rubio to stick his head out on this issue, basically making him there token Julio.

Then they would insert legislation like Leahy’s same-sex amendment, in hopes that Rubio would back  out of the bipartisan bill, effectively dinging him as being against Hispanics and immigration reform.

The only think Rubio can do now is back out, take the hit, and go back to the drawing board. Rubio, who caused himself significant political damage for standing with Schumer, Durbin, McCain and others on immigration reform, will have a lot of damage control to do with his base after all of the immigration dust settles.