Buchanan for Arbitration, Lincoln for War 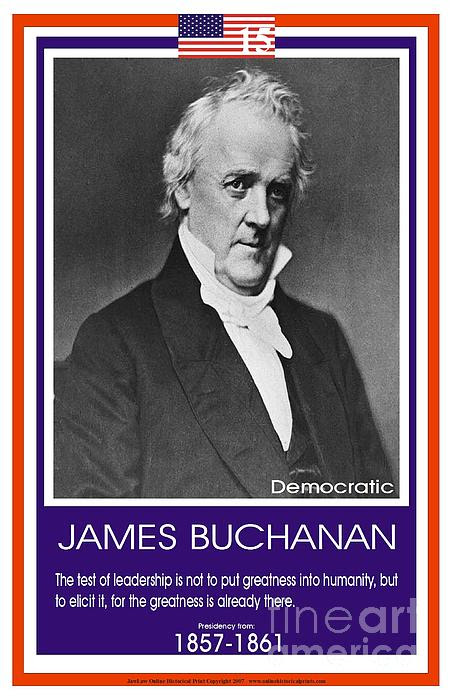 "The question fairly stated is, Has the Constitution delegated to Congress the power to coerce a State into submission which is attempting to withdraw or has actually withdrawn from the Confederacy? If answered in the affirmative, it must be on the principle that the power has been conferred upon Congress to declare and to make war against a State. After much serious reflection I have arrived at the conclusion that no such power has been delegated to Congress or to any other department of the Federal Government. It is manifest upon an inspection of the Constitution that this is not among the specific and enumerated powers granted to Congress, and it is equally apparent that its exercise is not "necessary and proper for carrying into execution" any one of these powers.

President Buchanan was keenly aware that he had no constitutional means to stop a State from withdrawing from the Union, and could command no military force to do so.   Lincoln’s use of force was enabled by Republican governors who put armed force at his disposal and with which to wage war. The author below cites Buchanan’s careful analysis of the powers of the three branches of government, legislative, executive, and judicial, that this “could perhaps be called the valedictory of the first seventy years of constitutional government in the United States.”  Buchanan’s real concern with preserving of the Union resided in attempts at arbitration, and fundamental to any understanding of Buchanan’s policy is his clear concept of the rights of a minority group in a republican form of government.
Bernhard Thuersam, Chairman
North Carolina War Between the States Sesquicentennial Commission
www.ncwbts150.com
"The Official Website of the North Carolina WBTS Sesquicentennial"

Buchanan for Arbitration, Lincoln for War

“[There] is good reason to believe that President James Buchanan, as well as many other leaders, expected to avoid open conflict. The mood of the country had sobered at the realization that a sectional party had elected a president. Public opinion, in general, was entirely remote from the thought of war. Forty years of public service, in both houses of Congress, in the cabinet, and in the courts of Europe, suggested arbitration of the crisis to Buchanan.  War he believed, “ought to be the last desperate remedy of a despairing people, after every other constitutional means of conciliation had been exhausted.”

Buchanan remained firm in his conviction that “justice as well as sound policy requires us still to seek a peaceful solution.” If the tall shadow of the president-elect [Lincoln] lay across every discussion, then it will be remembered that Lincoln remained, during this period, a shadow indeed, without a voice of assurance or warning.

Buchanan’s conciliatory stand has, until recently, been buried under the avalanche of post-war attitudes which show him only as the inept and weak man who stepped down for Lincoln’s administration.  An able scholar. . . Professor James G. Randall, comments succinctly, “If . . . preservation of the Union by peaceable adjustment was possible, then unionists were not faced with a choice of war or disunion, but rather a choice between a Union policy of war and a Union policy in the Virginia sense of adjustment and concession.”

Especially suggestive to students of the period is Randall’s recent statement that “the wars that have not happened” should be studied.  Judged in the light of “historical relativity” rather than in the concept of the “irrepressible conflict,” Buchanan’s policy, particularly as outlined in his December 3rd [1860] address to the nation, is subject to fresh interpretation.

[President Buchanan’s] course was, rather, that of a man trained in a political school of compromise, whose viewpoint was shaped by his legalistic interpretation of the executive power as it was limited by the Constitution. Summarizing the President’s careful exposition of this stand, [biographer George Ticknor] Curtis concluded with him that, “To the Executive Department it appropriately belonged to suggest the measures of conciliation. . . But the Executive could not in the smallest degree increase the means which existing laws had placed in his hands.”

The concept of “historical relativity” was at the core of the defense offered by Buchanan’s most recent biographer, Philip Gerald Auchampaugh, who, in 1926, openly attacked the “staff of arm-chair Generals of History Departments who, for the most part, have taken up their pens for the winning side”. . . . .

His brief for Buchanan’s policy is unqualified and specific:

“His main aim, to give things a peaceful direction, and prevent the opening of a terrible “Brother’s War,” had been accomplished midst terrific difficulties. No stone had been left unturned to promote measures of compromise that would be fair to all concerned. The President had also escaped the pitfalls of the Republicans, by standing firmly on his constitutional prerogatives, both in dealing with Congress and the Southern States.”

Edward Channing pointed out that Buchanan had no power, “either constitutional or material,” to use coercive measures and suggested that, especially in view of the small military force at his disposal, “If he had wished to coerce the South or any individual within its boundaries, it is difficult to see how he could do so.”

Randall discounts the theory of the “irrepressible conflict,” recognizes the President’s dilemma in its implications for that time, and appraises the long-term validity of compromise and conciliation.  Assessing the terrific losses on both sides of the conflict, from war to reconstruction, he suggests “a fuller measure of democracy would probably have prevented the war or at least have mitigated its abuses.”  Backed by the accumulating mass of evidence, he states with conviction that “There is little doubt that at the moment the majority of the American people wished for conciliation to be tried.”

“Time is a great conservative power. Let us pause at this momentous point and afford the people, both North and South, an opportunity for reflection,” said Buchanan on January 8, 1861. This strategy was also within the framework of a tradition, which had, as in the case of the [New England’s 1814] Hartford Convention, seen active resistance and threat of secession avoided with time as a moderating force.  In modern terms, Buchanan might be said to have viewed secession as sort of a “sit-down strike,” to be solved by arbitration rather than by force.

Facts and events were, in truth, shaping the destiny of the plantation system and, as Arnold Toynbee has suggested, were tending to outlaw slavery.  Already the slave system in the United States, as a labor supply, was in competition with the ever-growing tide of immigrant labor in the factories of New England.

Geographic boundaries were being set quite as much by the advance of the free farming frontier. . . . these factors suggest that Buchanan’s strategy of time, perhaps even a delay of ten years, might have avoided the war.  He was not unaware that a precedent for the peaceful solution of the complex problem of emancipation had been set by England in 1833.

With war as an easy alternative, the eventful one hundred and fifty days before [Fort] Sumter offered a fertile field for study of the technique of arbitration, for here the uncertain balance between compromise and conflict was maintained. . . . his conviction that the Union could not be cemented by the blood of its citizens, it is difficult to see how Buchanan could have chosen another course.”