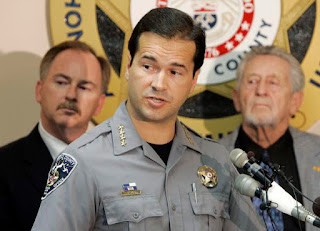 About 2 weeks ago, the Commierado Senate Democrats sent a tweet saying the Sheriffs who oppose the new CO gun laws side with the criminals.

WHO REALLY SIDES WITH CRIMINALS?

On May 17, the official twitter of the CO Senate Democrats sent a tweet that stated "2day CO sheriffs stood in opposition of CO's new gun laws, but not w/law-abiding citizens, but with criminals.

#coleg#sheriffs4criminals"   This is absolutely absurd and in reality they could not have gotten it more wrong.  Most disappointing is the media has failed to hold them accountable for their misinformation.

This statement demonstrates the embarrassing ignorance of the mindless puppet making this insinuation while authoring this tweet.  I will refer to this representative of the CO Senate Democrats as a puppet, because I have no actual name. The actual definition of puppet given in Webster’s Dictionary is as follows: a person or an organization that is controlled by another person or organization.

According to KRDO, this statement was issued by the "Senate Majority Office".  Obviously, they will not identify themselves and risk being challenged.  They accuse sheriffs of siding with criminals, but sheriffs are not able to challenge their accuser because they hide the person that made the statement and unfortunately, the media will not challenge them on their statement or anonymity.

The 800 plus citizens who attended the Tuesday night fundraiser supporting the lawsuit should be outraged and offended by this tweet since it insinuates sheriffs stand by criminals.  We are standing up for the rights of law-abiding citizens and they insinuate these law-abiding citizens are criminals.  Sadly, it only strengthens the reason for recalling some of these freedom attackers.

Let's get to the facts.  This may be a new concept for this puppet as he or she fails to articulate any.


More @ Resister In The Rockies
Posted by Brock Townsend at Monday, June 03, 2013