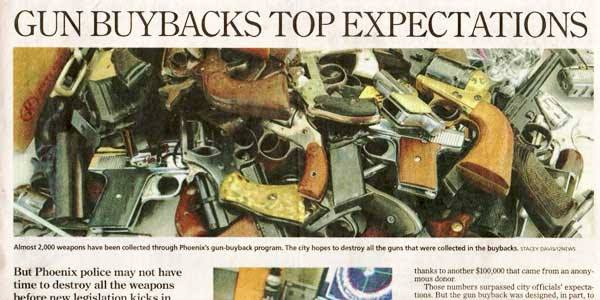 The only image available of the guns is this one from a newspaper, The Arizona Republic, credited to a TV station, Channel 12 News, the local NBC affiliate. The one relic on the right looks like a replica, most of the guns appear old and cheap, some are incomplete, including one in a baggie in the upper right. Nothing appears labeled or controlled, a good model could simply walk and who would know, maybe that’s why there are none visible. If there is any accountability for the 2,000 anonymously purchased items, it is a mystery. By rough count, at the city’s going purchase price, that’s about $3,300 worth of guns pictured right there. Note the difference between this caption and the one published.


The whole program was filled with feel-good hoaxes that “are doing zero percent for public safety.” -Phoenix Law Enforcement Association Someone anonymously provided $200,000, to buy 2,000 guns in Phoenix, AZ of May 2013, using $100 grocery gift cards as the money. If it was billionaire mayor Michael Bloomberg as the well-founded rumors suggest, he would have had to do it anonymously, and wash the money pretty good, because it’s illegal to buy guns like that across state lines. Buying 2,000 guns that way would be 2,000 federal and state felonies. Giving money to someone else to buy guns for you — knowing you can’t buy them yourself – would be a “straw purchase,” something mayor Bloomberg knows is strictly illegal, since he has been fighting against straw buyers publicly for a long time. We don’t know who put up the cash and he sure isn’t saying. The crime doesn’t require that the true buyer ultimately receive the guns, just that the money moves through a knowing straw man The broadcast and print “” media promoted the buyback event, proclaimed it good, spewed hyperbole about taking guns off the street, making us safer, disarming criminals, saving children. At last, something good was being done about all those nasty guns. You couldn’t miss the fanfare, it was even on billboards. But there was no mention how that was paid for?


These guns were never “on the street”

of course, with its dirty ghetto connotation, they were in closets and drawers in folks’ homes. That’s just anti-gun racism that bigots like to sling at gun nuts, their “” word for you. But I digress.

Somebody wrote the check that provided the money that was given to the perpetrators that bought the guns in the Phoenix gun buyback. It doesn’t matter who. And it’s really a buy up, you can’t buy back something you never owned in the first place.

HOW WAS IT DONE?