The Rise of Nullification 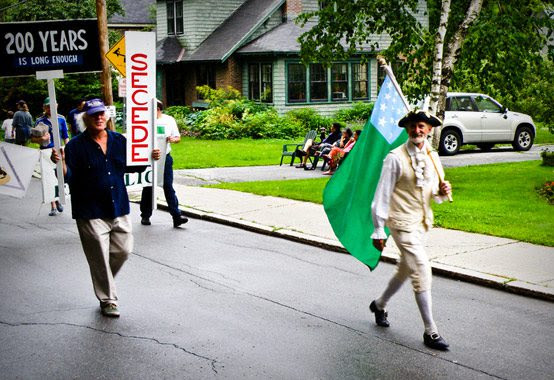 Most Likely to Secede: What the Vermont Independence Movement Can Teach Us About Reclaiming Community and Creating a Human-Scale Vision for the 21st Century, Ron Miller and Rob Williams, eds., Chelsea Greeen. 272 pages

I presume to review this book, even though I am a contributor to it, because it is a fine representation of an increasing tendency across this land of resistance to a federal government grown inept, corrupt, overreaching, overlarge, and overintrusive. That tendency may be labeled, for convenience: nullification.

It doesn’t matter that the word does not appear in this volume, for its spirit does. The volume is called Most Likely to Secede, and it grows out of a secession movement in Vermont that has been active, off and on, for a decade now. But I don’t think secession really is in the immediate future. Instead the subtitle comes closest to what this book is all about—state independence. It is a collection of essays from a magazine called Vermont Commons, which started publishing in 2005, and they deal with every aspect of what it takes for a state to assume unto itself all the processes that have been ceded to (or seized by) the federal government over the years: money, business regulation, energy, health, education, democracy, food safety, information, the commons, and social policies such as abortion and marriage.

Obviously, every attempt to increase or establish independence on the state level will eventually run up against laws and regulations on the federal level.

Kirkpatrick Sale is director of the Middlebury Institute and the author of a dozen books, most recently Emancipation Hell: The Tragedy Wrought by Lincoln’s Emancipation Proclamation 150 Years Ago.
Posted by Brock Townsend at Monday, June 17, 2013