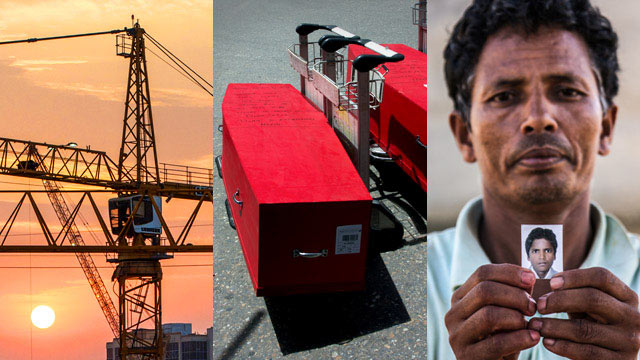 Exclusive: Abuse and exploitation of migrant workers preparing emirate for 2022

Dozens of Nepalese migrant labourers have died in Qatar in recent weeks and thousands more are enduring appalling labour abuses, a Guardian investigation has found, raising serious questions about Qatar's preparations to host the 2022 World Cup.

This summer, Nepalese workers died at a rate of almost one a day in Qatar, many of them young men who had sudden heart attacks. The investigation found evidence to suggest that thousands of Nepalese, who make up the single largest group of labourers in Qatar, face exploitation and abuses that amount to modern-day slavery, as defined by the International Labour Organisation, during a building binge paving the way for 2022.

According to documents obtained from the Nepalese embassy in Doha, at least 44 workers died between 4 June and 8 August. More than half died of heart attacks, heart failure or workplace accidents.


More with video @ The Guardian
Posted by Brock Townsend at Friday, September 27, 2013