The Standing Army Marches On 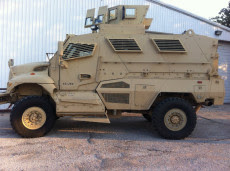 When the Constitution’s Framers adopted the 3rd Amendment, prohibiting the peacetime quartering of soldiers, they had fresh on their minds the experience of the British occupation of Boston, the use of armed enforcers to conduct searches without traditionally restrictive warrants, and the overall spectacle of government officials heavily armed in a military capacity patrolling the streets to enforce the central state’s will. Thomas Jefferson condemned standing armies as “instruments so dangerous to the rights of the nation and which place them so totally at the mercy of their governors that those governors, whether legislative or executive, should be restrained from keeping such instruments on foot but in well-defined cases.”

The fear here was not so much that soldiers nominally associated with the military proper would patrol the streets, but that heavily armed officials with the best military equipment available would treat domestic affairs as though everywhere were a war zone. The colors of the uniforms and even jurisdiction were secondary to the material existence of ubiquitous armed agents with wide discretion in enforcing the government’s decrees.