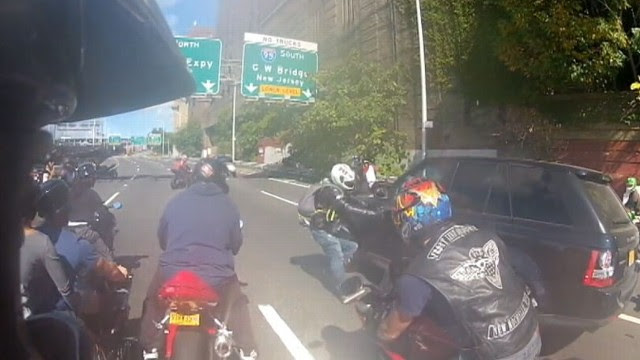 Here is what the local newspapers did not report about the mob of dozens of motorcycle riders who chased, stopped and beat the father of a young Asian family on a Sunday afternoon in New York City: One, the mob was black, says the police report. Two, this is merely the latest of several such examples of racial violence on wheels, witnesses say.

Except this one is on video. All six minutes and 27 seconds of it. Recorded on the helmet-cam of one of the members of the black motorcycle mob.

“The newspapers say it was a motorcycle gang,” said one veteran member of New York’s law enforcement community. “That makes you think it was a white gang, like the Hell’s Angels. But it was the total opposite.”

Cops busted the psycho biker who allegedly started the confrontation that ended with an SUV driver being badly beaten — as sources said another cyclist hurt in the mayhem may be paralyzed for life, sources told the New York Post Tuesday.

Biker suspect Christopher Cruz, 28, of Passaic, NJ, was charged with reckless endangerment, reckless driving, endangering the welfare of a child and menacing in the attack on Alexian Lien, 33, who had been out with his family for a Sunday drive in Upper Manhattan.

As the video begins, a black Range Rover is heading north in the direction of Harlem. Driving is *Lien, his wife and child are also in the car – now being pursued and surrounded by more than 50 bikers. *Probably Vietnamese.
It is not clear what, if anything, happened before the video begins.