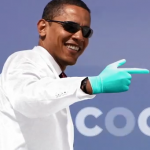 An average Texas single mom’s letter “thanking” President Obama for Obamacare, and all that it entails, has gone viral
.
Yolanda (Lana) Vestal posted the letter on her Facebook page, and what started out as a way to vent, became a way for others to share frustration over Obamacare. The single mother of two blasts the president for increased taxes and lavish vacations. The post has received over 63,000 “shares,” according to FreePatriot.org.

Here is Vestal’s letter to Obama:

I wanted to take a moment to say thank you for all you have done and are doing. You see I am a single Mom located in the very small town of Palmer, Texas. I live in a small rental house with my two children. I drive an older car that I pray daily runs just a little longer. I work at a mediocre job bringing home a much lower paycheck than you or your wife could even imagine living on. I have a lot of concerns about the new “Obamacare” along with the taxes being forced on us Americans and debts you are adding to our country. I have a few questions for you Mr. President.

Have you ever struggled to pay your bills? I have.

Have you ever sat and watched your children eat and you eat what was left on their plates when they were done, because there wasn’t enough for you to eat to? I have.

Have you ever had to rob Peter to pay Paul, and it still not be enough? I have.

Have you ever been so sick that you needed to see a doctor and get medicine, but had no health insurance because it was too expensive? I have.

Have you ever had to tell your children no, when they asked for something they needed? I have.

Have you ever patched holes in pants, glued shoes, replaced zippers, because it was cheaper than buying new? I have.

Have you ever had to put an item or two back at the grocery store, because you didn’t have enough money? I have.

Have you ever cried yourself to sleep, because you had no clue how you were going to make ends meet? I have.

My questions could go on and on. I don’t believe you have a clue what Americans are actually going through and honestly, I don’t believe you care. Not everyone lives extravagantly. While your family takes expensive trips that cost more than most of us make in two-four years, there are so many of us that suffer. Yet, you are doing all you can to add to the suffering. I think you are a very selfish and cold hearted man, who does not care what is best for the people he was elected by (not by me) to represent, but more so out for the glory of your name attached to history. So thank you Mr. President, thank you for pushing those of us that are barely staying afloat completely under water and driving America into the ground. You have made your mark in history, as the absolute worst and most hated president of the United States. God have mercy on your soul!